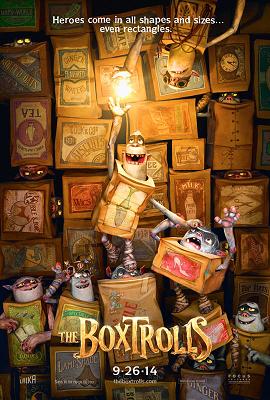 The Boxtrolls is a 2014 Stop Motion animated film from Laika Animation Studios, the makers of Coraline and ParaNorman. Directed by Graham Annable (of Grickle and Nelson Tethers: Puzzle Agent fame) and Anthony Stacchi, it is loosely based on the novel Here Be Monsters!

Cheesebridge is a posh Victorian-era town obsessed with wealth, class and the stinkiest of fine cheeses. The only thing that its residents are more obsessed with than cheese is their fear of the evil, murderous monsters that dwell in the sewers. At least, that's the legend residents have always believed. In truth, the Boxtrolls are an underground cavern-dwelling community of quirky and lovable oddballs who wear recycled cardboard boxes the way turtles wear their shells. They've even raised an orphaned human boy, Eggs (Hempstead-Wright), since infancy as one of their own. When the Boxtrolls are targeted by villainous Boxtroll exterminator Archibald Snatcher (Kingsley), who is bent on eradicating them as his ticket to Cheesebridge high society, the kind-hearted band of tinkerers must turn to their adopted charge and an adventurous young girl named Winnie (Fanning) to save them all.

The Boxtrolls provides examples of:

Example of:
Brotherhood of Funny Hats