Too Unhappy to Be Hungry 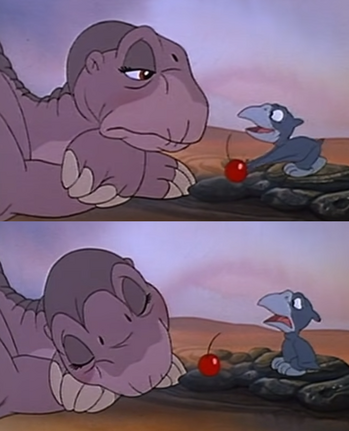 "Oh dear! You must be really sad if you won't eat chicken!"
— Princess, Little Princess, "I Didn't Do It"
Advertisement:

We all need food to survive and most of us enjoy it too, but sometimes, we're too sad, scared, or angry to eat, and that's what this trope is.

If they're sad, maybe they're grieving or getting over a bad breakup, but they could also have just had a bad day. Likewise, if they're afraid, their fear could be crippling anxiety or a response to a serious threat, but it's just as likely to be a mild thing like Performance Anxiety.

Whatever the reason, they just can't bring themselves to eat much, if at all. This can lead to someone immediately noticing that something is amiss if the person usually loves to eat or loves the food in particular, and in these cases, the person will either lie and say, "I'm just not hungry", "I'm just tired" (followed by going to bed), or "I think I'm coming down with something" or open up.

Opening up will usually lead to the other person giving them a pep talk (which might also happen if they lie and the person doesn't believe it, prompting a line such as "Come on— I know something's bothering you. Spill."), and/or the person whose appetite was gone going on a long, angry rant. The emotional non-eater might also be mistaken for being unwell by a character who thinks Appetite Equals Health. Another variation is for someone to offer a sad character some Comfort Food, only for the character to turn it down.

Quite often the character's behaviour depends on their emotion: scared characters often pick at their food or eat it slowly, sad characters do either of those or push it away, and angry characters will often angrily play with it before pounding their utensil into it, throwing it, or similar.

Compare Lost My Appetite and its sub-trope Put Off Their Food where the loss of appetite is due to simple disgust, Does Not Like Spam where they'd never eat that food anyway, Too Upset to Create for another instance of not doing something due to a low mood, I'm Not Hungry for when they actually are hungry but are choosing not to eat in protest, and Forgets to Eat for when they're simply distracted. Contrast Heartbreak and Ice Cream, Post-Stress Overeating, and Inappropriate Hunger. In extreme cases, it might lead to Death by Despair.