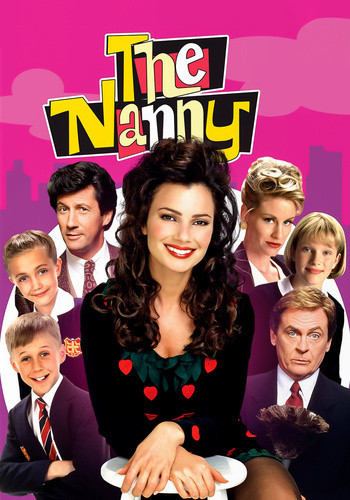 L-R: Brighton, Gracie, Maxwell, Fran, C.C., Maggie and Niles
"She was working in a bridal shop in Flushing, Queens
Till her boyfriend kicked her out in one of those crushing scenes
What was she to do, where was she to go
She was out on her fanny
So over the bridge from Flushing, to the Sheffields' door
She was there to sell makeup, but the father saw more
She had style, she had flair, she was there
That's how she became The Nanny!"
— Theme Song
Advertisement:

A Fish out of Water family sitcom (1993-1999) starring the raspy-voiced, big-haired flashy Fran Drescher. The pitch was also conceived by Drescher, inspired by The Sound of Music as well as a conversation with Twiggy's adolescent daughter. The series ran for a respectable six seasons. Perhaps one of the greatest successes this show had was its big and colorful cast, ranging from the sarcastic British Butler to the Jewish Mother.

As seen above, the Expository Theme Tune pretty efficiently sums up the basic plot, but to briefly provide just a bit more context; Drescher plays Fran Fine, a loud, flashy and big-hearted Jewish-American woman who, after a series of personal and employment-related calamities, ends up as a door-to-door cosmetics salesperson at the residence of Maxwell Sheffield (Charles Shaughnessy), a wealthy, stuffy and thoroughly British producer of Broadway musicals. From there, Fran manages to wrangle herself a job as nanny to Maxwell's three children despite Maxwell's initial reservations. From there, general shenanigans, chaos and romance between Fran and Maxwell ensues, gently prodded on by the Deadpan Snarker butler Niles and not-so-gently resisted by CC, Maxwell's snooty business partner with her own romantic designs on Maxwell.

The show was immensely popular in many countries outside USA (Argentina, Australia, Chile and Russia, to name a few), even getting the "the most viewed program" spot in some. This success led to many foreign adaptations

, to cash in on the show's popularity and give some local flavor.

In the US, it's had two Spiritual Successor series: the first was called Living With Fran and lasted two seasons, the second was Happily Divorced. It also has a "kiddiefied" half-Spiritual Successor on Disney Channel, Jessie, created by the executive producer of The Nanny and directly inspired by the earlier show.

Drescher's 1997 film The Beautician and the Beast is a bite-sized version of the series; basically, it's what you get when you drop Fran Fine and Joseph Stalin in Whateverstan, stand back and watch what happens.

The animated opening theme to The Nanny.

The animated opening theme to The Nanny.