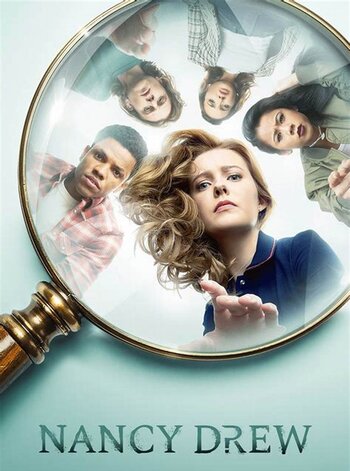 You know her name.
Girls love a mystery.
Advertisement:

Nancy Drew is a 2019 horror mystery series on The CW. It is the third television adaptation of the titular character created by the Stratemeyer Syndicate, following a 1970s crossover with The Hardy Boys and a short-lived 1995 standalone series.

Nancy Drew (Kennedy McMann) solved her first mystery when she was just in seventh grade but after her mother died of cancer, she gave all of that up. Working at the Craw diner with former high school frenemy George Fan (Leah Lewis), city girl Bess Marvin (Maddison Jaizani), and loner stoner Ace (Alex Saxon), she is pulled back into solving mysteries when Tiffany Hudson, wife of local rich businessman Ryan Hudson (Riley Smith), dies in the Craw's parking lot. Now Nancy, George, Bess, and Nancy's ex-con boyfriend Ned "Nick" Nickerson (Tunji Kasim) are all suspects in her death and Nancy has to prove who actually did it.

Complicating matters is the fact that Nancy's father, Carson Drew (Scott Wolf), is keeping secrets from her, and the fact that video footage from before Tiffany Hudson's death points to the killer being a ghost...specifically, "Dead Lucy," the ghost of Lucy Sable, a girl who died years ago and whose body was never found. When Nancy discovers evidence that her parents might have been involved, she also discovers that Lucy's ghost might be more real than she ever imagined.

From there, Nancy and her friends realize that something big has happened to Lucy that it may be tied to other spooky things going on in Horseshoe Bay.

The show is notable for being the first successful small-screen adaptation of Nancy Drew in the new millennium after years of failed attempts involving different networks. ABC created a Pilot Movie in 2002 that did not generate enough interest to merit a series. The critical and financial failure of the 2007 film adaptation put any more adaptation on hold until 2015, when CBS was reportedly developing a series starring Sarah Shahi as an older Nancy. A pilot was shot, but its creators eventually ditched it in favor of Doubt (which ended up being canned after one season). Two years later, the same creators attempted to pitch a pilot again, this time revolving around a middle-aged Nancy, to NBC, but received a negative response.

The series has aired three seasons, and a fourth has been ordered, making it the longest-running adaptation of a property of Stratemeyer Syndicate. In October 2020, it was announced that The CW was developing a potential spin-off series focusing on Tom Swift. Tom, now reimagined as a gay African-American man, debuted in an episode of Season 2 ("The Celestial Visitor"), played by Tian Richards. The series, aptly titled Tom Swift, was given a series order in August 2021, and will premiere in May 2022.

The series is not connected to Nancy Drew and the Hidden Staircase, which came out the same year.

Temperance has... a supernatural way to get Nick to comply to her demands.

Temperance has... a supernatural way to get Nick to comply to her demands.