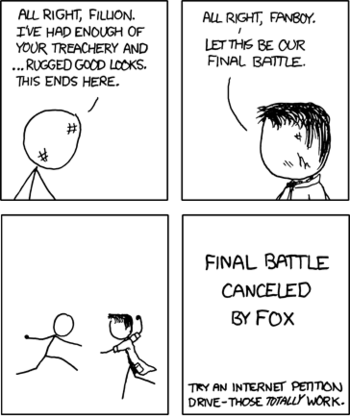 Woody: Come on, let's see the next episode!
Stinky Pete: That's it.
Woody: What?
Stinky Pete: The show was cancelled after that.
— Toy Story 2
Advertisement:

The polar opposite of a Grand Finale: a series ends abruptly, without resolution of its basic premise, due to some unplanned event such as cancellation, the 65/40-episode limit or the creator dying before finishing. The story does not end, it simply stops in medias res, possibly with a Cliffhanger. In a few lucky cases, The Resolution Will Not Be Televised, but goes directly to DVD and Blu-ray. In even luckier cases the series will be able to Wrap It Up with a miniseries, a movie, or a new season. More often than not, however, there is no final resolution.

Even more frustratingly, often shows create Myth Arcs haphazardly, stringing viewers along and never really intending to offer any conclusion to the story arcs they tell the first 2/3s of, or answering the questions they raise. This is called The Chris Carter Effect. Those that do care utilize the Front 13, Back 9 episode plan in an attempt to avert this Trope, though that's no guarantee when Real Life Writes the Plotnote i.e. Any Tropes in that index plus TV Strikes.

If the work has a sufficiently dedicated fanbase, this can become Fanfic Fuel for a Continuation fic. Compare No Ending, in which there is a deliberate decision to end a work abruptly, and Left Hanging, where while the series ends, many questions are left unanswered. If it doesn't deal with the major plot issues, a Gecko Ending will include this. See also Orphaned Series and The Resolution Will Not Be Televised (when a work is wrapped up in a different medium).

Into English
Into Greek
Into Tagalog