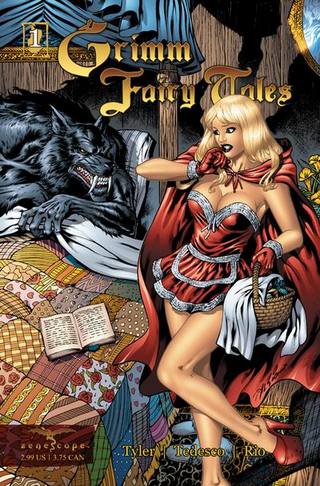 "Oh grandma, what a big *BLEEP* you have!" note "All the better to *BLEEP* you with, my dear."
"Scene 3: Daphne Rubin-Vega plays Mimi. In 'Boheme', she's a sweet, shy seamstress. Now, she's a CRACK-HEAD, NYMPHOMANIAC PROSTITUTE! YEAH!"
— Forbidden Broadway parody of RENT
Advertisement:

Good news! You've acquired the rights to remake that classic work you dearly loved as a child into a brand-new movie/novelisation/TV series/comicbook/whatever. But hold on; looking at the original again, you realize something. Shockingly, there's No Hugging, No Kissing—not even sexual tension or a gratuitous bikini shot. Well, that will never do—surely people only ever watch TV for the sex, right? And what'll keep the parents entertained? There's only one thing for it: you'll have to make it Hotter and Sexier.

Firstly, all female characters get Stripperiffic outfits, while all men get one Shirtless Scene after another. Then add some "Witty Banter" between the lead characters about penis size, some bow-chicka-bow-wow, a "manly" hero and a Chaste Sidekick who's a stupid and innocent virgin, a Ms. Fanservice with Gag Boobs and no nudity taboo. Heck, why not go all the way and chuck everyone in bed together and say it's just you making the series more mature.

Unsurprisingly, fans tend to dislike remakes that use this Tone Shift for several reasons. Firstly, these are characters that people have cherished since childhood, and it can be very disturbing to see them suddenly start making masturbation jokes. Secondly, some people feel awkward about blatant innuendos in children's shows, especially when they are so blatant that the clean meaning is harder to find than the dirty one. Third, it can seem insulting to both the viewers and to the franchise. It seems to be saying both that "Viewers Are Morons—they won't watch a show unless it has sex in it!" and "this show is so terrible that if we don't chuck some cheap titillation in, no one'll watch it!". Finally, given that the sex is effectively added as an afterthought, it can often feel badly taped on, especially when the content is the result of Executive Meddling.

It's not always a bad thing. Some creators originally planned for their work to include lots of sex, only for it to be nixed by the Moral Guardians. Older works that were raunchy and risque at the time may not be as the times have changed, so to keep the same feel the sexual themes are exaggerated more than the original. As a result, when the work gets remade in a new, less restrictive media (such as TV to film, or anime to manga), the creator can restore what was cut before, with the advantage that this time, the content is properly integrated with the story.

It's not always bad when applied to costumes either. Sure, most of the time it's disheartening or trashy, but sometimes the design just looks better and sleeker.

A Super-Trope to Sexy Whatever Outfit.

A Sister Trope to Sex Sells.

Parallel to Darker and Edgier, Lighter and Softer, Bloodier and Gorier, Denser and Wackier and Younger and Hipper.

See also Avoid the Dreaded G Rating and Rated M for Money. Rule 34 cranks this Up to Eleven. If a single specific character gets this, see Historical Beauty Update, Fanservice Pack, Adaptational Attractiveness, or Adaptational Skimpiness. Going in the opposite direction will get you Tamer and Chaster, Bleached Underpants or Adaptational Modesty.