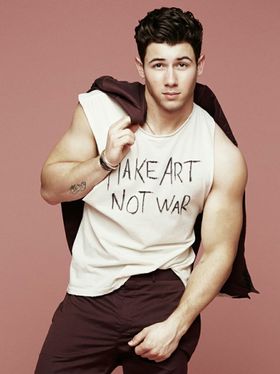 Nicholas Jerry Jonas (born September 16, 1992) is an American singer-songwriter, musician and actor, best known for being one-third of The Jonas Brothers, a pop-rock band he formed with brothers Joe and Kevin. Originally intended as a solo act, his record label liked the way he sounded with his brothers on backup, thusly launching them as a trio.

Apart from his brothers, he formed Nick Jonas & The Administration, releasing their first (and only) album in 2010. He's since gone solo, releasing his self-debut album in November 2014, which spawned the hit singles "Chains" and "Jealous", the latter of which charted as his first Top Ten hit in the United States.

In addition to his screen roles, he's also done musical theatre. Some of his more prominent roles include Chip in Beauty and the Beast and J. Pierrepont Finch in How to Succeed in Business Without Really Trying.

In 2019, it was announced that he would replace Adam Levine as a panelist on The Voice.