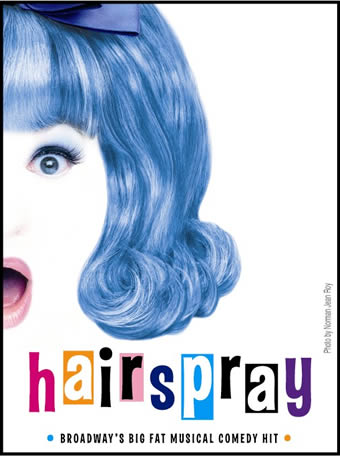 "I was lost 'til I heard the drums, then I found my way
'Cause you can't stop the beat!"
"Good morning Baltimore
And some day when I take to the floor
The world's gonna wake up and see
Baltimore and me!"
— Tracy, "Good Morning Baltimore"
Advertisement:

The 2002 musical adaptation of the 1988 comedy film. The original film was for the most part not a musical per se, just full of music, and its songs were all Dance Sensation songs of one sort or another. The musical had songs tell the story more directly.

The storyline is similar to the original, with some changes (for example, Velma Von Tussle has a larger role). Overweight teenager Tracy Turnblad and her best friend Penny want to audition for The Nicest Kids in Town. Though Tracy's mother Edna disagrees, her father Wilbur is supportive, and so Tracy goes to audition and meets Link Larkin, one of the show's heartthrobs. Producer Velma Von Tussle rejects her for her weight, but a run-in with a black dancer, Seaweed J. Stubbs, starts a chain of events that transforms the show.

The musical premiered in Seattle before making the move to Broadway later in 2002. It introduced the world to Marissa Jaret Winokur (who previously was more known as the fast-food girl with Kevin Spacey in American Beauty).

It got a film adaptation in 2007, introducing Nikki Blonsky as Tracy and co-starring John Travolta (as Edna) and Zac Efron (as Link).

Not to be confused with Hair.

Tropes in the stage version: 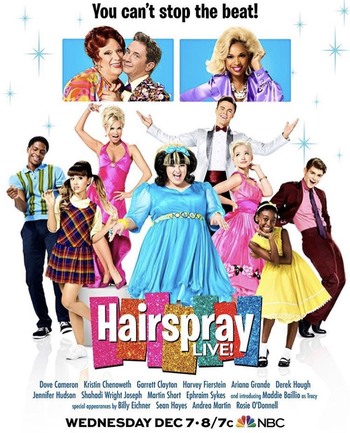