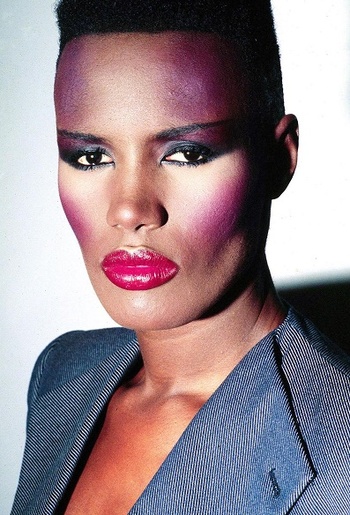 She started her career in The '70s in high fashion meccas like New York and Paris, modelling for prestigious designers of that field such as Yves Saint Laurent and Kenzo. Her trademark androgynous beauty was captured by renowned photographers such as Helmut Newton, Guy Bourdin and Hans Feurer, and made her a muse for avant-garde artists like Andy Warhol and a prominent cover subject for magazines like Elle and Vogue. She also had much influence on the crossdressing trends of The '80s, and she has Drag Queen imitators to this day.

She has sung in various musical genres (disco, reggae, funk, pop, post-punk... and even Chanson), frequently collaborating with both the graphic designer Jean-Paul Goude and the reggae/dub band Sly & Robbie. Later performers like Lady Gaga were heavily influenced by the works that resulted of these collaborations.

Jones had acting roles in movies such as the blaxploitation picture Gordon's War, Vamp, Conan the Destroyer, the James Bond film A View to a Kill and Boomerang (1992). On a more trivia note, she convinced her then-bodyguard turned boyfriend Dolph Lundgren to make himself a career in acting, starting with a small role in the aforementioned A View to a Kill.