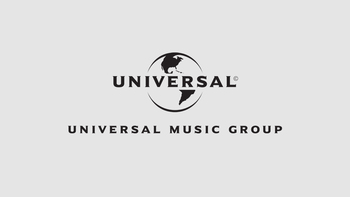 Universal Music Group (UMG) is the largest music label in the world. Along with Sony Music Entertainment and Warner Music Group, it makes up part of the "Big Three" of major music conglomerates.

The group can trace its origins back to 1934, with the foundation of Decca Records' American branch. Decca purchased Universal in 1952, before merging with MCA a decade later.

After MCA was purchased by Matsushita Electronics and then Seagram in 1996, it was renamed Universal Studios Inc., while its music division was reorganized as Universal Music Group, after merging with PolyGram.

In 2004, UMG's relationship with the larger Universal ended after the latter was acquired by General Electric and merged with NBC. In 2006, ownership of the label passed to Vivendi, who maintained a minority stake in NBCUniversal until its sale to Comcast in 2011 (UMG continues to operate under the Universal name under license from its former sister studio). Vivendi sold off the majority of it's UMG shares to the public stock market in 2021, effectively ending Vivendi's ties to Universal for good, though it still has a 10% stake alongside other investors. With the demise of EMI in 2011, UMG absorbed the defunct company's recording division and American roster. EMI's British and most of their European divisions were reorganized into Parlophone Records, now owned by Warner Music Group (although UMG was allowed to keep The Beatles' recordings, which were considered EMI's crown jewel).

In 2008, a fire broke out at Universal Studios Hollywood that lasted 12 hours, damaging much of the area in the process— including the warehouse where Universal Music Group kept a good chunk of their artists' master recordings. While the damage was heavily downplayed in official press releases from Universal, a 2019 article from the New York Times revealed that the fire had actually destroyed up to 175,000 master recordings from UMG-owned artists throughout the history of recorded music itself, from classic acts such as Chuck Berry and Buddy Holly to newer stars like R.E.M. and Nirvana. A full list of artists whose masters were lost can be found on the Wikipedia article

for the 2008 fire. While a good deal of the lost recordings were digitized beforehand, many others are most likely lost forever, and even in the digitized tapes' cases, the loss of the master recordings themselves has nixed any hopes for new remasters.

In the world of fandom, UMG have a notorious reputation for zealously defending the company's copyrights; many YouTube videos have been removed or altered for using UMG-owned songs.

Artists and songwriters whose copyrights are with Universal Music Publishing Group: