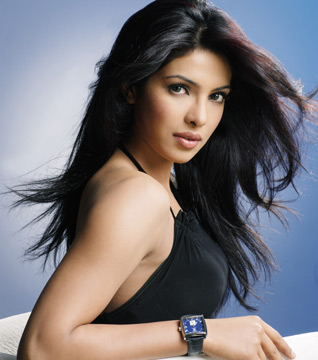 Priyanka Chopra Jonas (born 18 July 1982 in Jamshedpur, India) is an Indian actress, singer, and former Miss World. Before starting her acting career, she worked as a model and gained fame after winning the Miss World title in 2000.
Advertisement:

Chopra made her acting debut with the 2002 Tamil film Thamizhan. The following year, she made her Bollywood debut with The Hero: Love Story of a Spy and followed it with the commercially successful Andaaz, for which she won a Filmfare Best Female Debut Award. In 2004 she became the second woman to win the Filmfare Best Villain Award for her critically acclaimed performance in Aitraaz. Chopra would later have commercial success with films like Mujhse Shaadi Karogi (2004), Krrish (2006), her biggest commercial success so far, and Don - The Chase Begins Again (2006). Chopra earned a Filmfare Best Actress Award for her portrayal of a model in Fashion (2008). Co-starred with John Abraham and Abhishek Bachchan in Dostana.

Though not as well-known to American audiences, she's dabbled in the market, lending her voice to Disney's Planes (as Ishani) as well as starring in the ABC terrorism thriller Quantico in the lead role, making her the first Indian actor to headline a network television series in that country. note Mindy Kaling, star and creator of The Mindy Project, is American-born

Chopra has also done voice work on the mobile game Avengers Academy as Ms. Marvel (Kamala Khan). In Baywatch (2017) she and Alexandra Daddario (who played the Wasp in that game) split up, with Daddario as one of the lifeguards and Chopra as the Big Bad. She also has a role in The Matrix Resurrections, as an adult version of Sati from The Matrix Revolutions.

She is currently married to Nick Jonas.