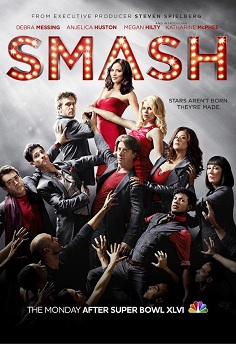 She'll do all she can
For the love of one man
And for millions who look from afar!
I'm what you've been needing
It's all here and my heart's pleading
Let me be your star!
Advertisement:

A 2012-13 musical drama on NBC from executive producer Steven Spielberg and the producers of Chicago and Hairspray.

When duo songwriters Julia Houston (Debra Messing) and Tom Levitt (Christian Borle), director Derek Wills (Jack Davenport), and producer Eileen Rand (Anjelica Huston) put on a Broadway musical based on the life of Marilyn Monroe, small town girl Karen Cartwright (Katharine McPhee) and veteran actress Ivy Lynn (Megan Hilty) audition for the star role. But things won't be easy when both women are favored for the role and must compete for it.

The second season switches direction by having half of Bombshell's production team defect for off-Broadway, where they launch a competing musical titled Hit List.

and the show within the show

Not to be confused with the Super Smash Bros. series, Smash TV, or Smash Williams.

Bombshell (The first Show Within a Show, previously titled Marilyn: The Musical) contains examples of: 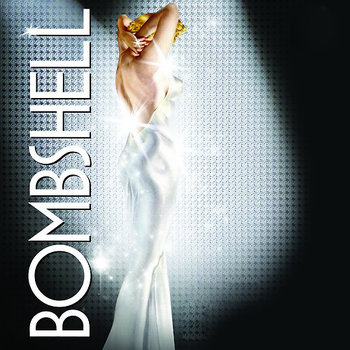 Hit List (the second Show Within a Show) provides examples of:

Ivy: C'mon, Karen Cartwright!
Karen: Where are we going?
Ivy: The show's over!