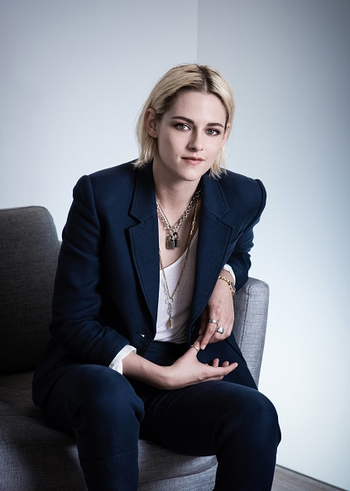 "I would have been very happy just working from job to job, paying my rent one movie at a time. I never wanted to be this famous. I never imagined this life for myself."
Advertisement:

Prior to Twilight, Stewart was a little-known actress who appeared mostly in independent films, occasionally getting supporting roles in studio films. At age ten, she had her first major role playing Jodie Foster's daughter in Panic Room. During this period, she was generally considered to be an up-and-coming talent by those who were aware of her.

Public opinion of deteriorated a bit following her role in the Twilight franchise Twilight, partly due to her being considered indistinguishable from the bland Bella Swan. Stewart also came off as a bit of a Shrinking Violet at the time and appeared to not enjoy being famous and seemed to preferred her pre-Twilight life. She has opened up considerably since, however, with her comfort in the public eye seeming to develop alongside a growing post-Twilight appreciation for her acting skill.

After finishing the Twilight series and portraying Snow White in Snow White and the Huntsman, she returned to small independent films. Her acting fortunes appear to have been looking up since 2015, as she became the first-ever American actress to win a César (the French version of the Academy Awards), Best Supporting Actress for Clouds of Sils Maria. That film also made her something of a muse for director Olivier Assayas, who cast her again in Personal Shopper. In 2021 she starred in Spencer as Princess Diana and gained a great deal of critical acclaim, and an Oscar nomination, for her performance. Since late 2013, she has also been the ambassador for renowned fashion brand Chanel.

Stewart is openly bisexual, and has been in several high-profile relationships with both male and female celebrities. She has been with screenwriter Dylan Meyer since 2019, and they got engaged in November of 2021.