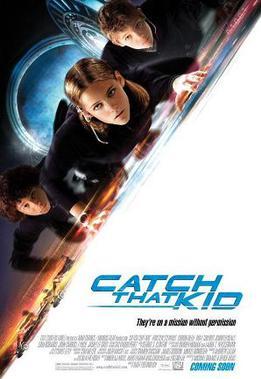 Catch That Kid is an action-comedy family film released by 20th Century Fox in 2004. It's a remake of the Danish film Klatretøsen.

The father of 12-year-old Madeline "Maddy" Phillips (Kristen Stewart) has been paralyzed from the waist down due to old injuries sustained from a climbing accident; while an experimental treatment is available, insurance won't cover it and her family doesn't have the $250,000 needed for the operation. Maddy decides that the only logical course of action is to rob a bank, and she recruits her friends Austin (Corbin Bleu) and Gus (Max Thieriot) to help her. Complicating matters, however, is that their bank of choice has a security system designed by Maddy's mom (Jennifer Beals).