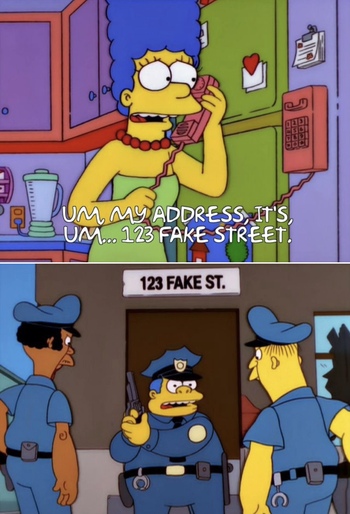 "Why did I have to say Market Street!?"
— Bugs Bunny: "Semper Lie", The Looney Tunes Show
Advertisement:

For some reason or another, a character might need to give out some false information to hide their real identity, location, or employer. If the situation is immediate enough, they may have to make up their false information on the fly, perhaps sounding obviously false. But, it's possible they accidentally gave out a real name, address, or other piece of information that does correspond to someone or something else, albeit not them. Hilarity Ensues as the unsuspecting recipients are suddenly questioned about events that have no relation to them. Another common variant is when a piece of fake information that isn't explicitly deceptive, like a pseudonym or nickname, ends up having the same effect.

Most commonly, this just serves to set up a brief Cutaway Gag, but it sometimes serves as a Brick Joke or Chekhov's Gun later on in the story.

A kind of Achievement In Ignorance. Similar to Accidental Truth, in that the information at least corresponds to something, if not what was hidden. Compare to I Am One of Those, Too, where a character makes up an aspect of their background and someone ends up having that exact aspect, and The Real Remington Steele, when a character is revealed to be using a fake alias, but later another person who is the real owner of the fake alias appears.

Due to just how many phone numbers and addresses are given in media, a decent amount of them are bound to end up being real (in fact, the 555 trope exists solely to prevent this). Due to this being a very real possibility for any fake address or phone number, No Real Life Examples, Please!

Pluto Gets the Paper: Mortimer

Mortimer Mouse sends Pluto away on a taxi, only for the taxi to stop nearby at the exact street names Mortimer said prior.

Pluto Gets the Paper: Mortimer

Mortimer Mouse sends Pluto away on a taxi, only for the taxi to stop nearby at the exact street names Mortimer said prior.