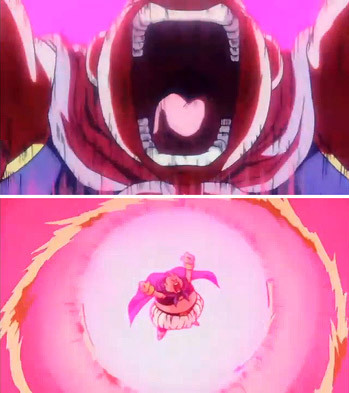 "NOW BUU MAD!!!"
"Daddy sent me to school, but things got weird
When the kids made fun of my long red beard
And OOOOOOOOOH! I blew my stack!"
— Yosemite Sam, The Looney Tunes Show
Advertisement:

A character releases bottled, superhuman rage and literally blows up.

The building they were in, as well as any buildings in a mile's radius, are leveled. Many die. But strangely, the originator of the explosion is usually unharmed.

Very rarely can be a Suicide Attack, if it is done on purpose and kills the user. Might also rarely be Why Am I Ticking?, if the detonation trigger is specifically tied to the character's rage. Compare Burning with Anger, which is seldom destructive past a few charred bits of furniture.

Not to be confused with Emotion Bomb, which induces emotion as an attack. Any character using this probably has Emotional Powers, especially when they build up as the emotion does.

The fangirls find out that their idol is already taken by some freak girl...

The fangirls find out that their idol is already taken by some freak girl...