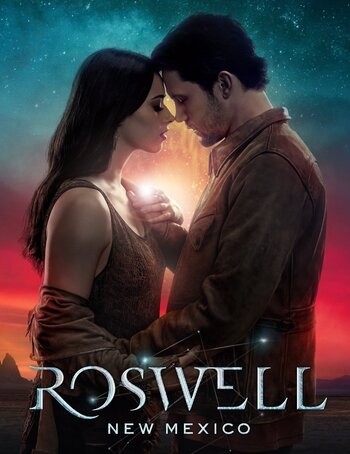 Roswell, New Mexico is an adaptation of Roswell High YA novels by Melinda Metz that began airing on The CW in 2019. It is the series' second live-action adaptation, after Roswell, which aired on The CW's two predecessors, The WB and UPN, from 1999 to 2001.note The first two seasons aired on The WB, while the third aired on UPN.

When Liz undergoes a Near-Death Experience, she is unexpectedly healed by Max. She promptly discovers that Max is actually a Human Alien who has been hiding his powers in order to blend in. Although Liz promises to keep Max's secret, his siblings and fellow aliens Isobel (Lily Cowles), who was raised alongside him, and Michael Guerin (Michael Vlamis), who was adopted by a different family, are far less trusting... and even Max himself, though kindly inclined towards Liz and usually sympathetic, has poorly concealed anger issues and a definite dark side.

Now that she's home, Liz finds herself thinking more and more about her older sister Rosa (Amber Midthunder), who died just before Liz left—whose death, in fact, was the instigation for Liz to leave Roswell forever. Initially digging into Rosa's death in order to gain closure, Liz soon discovers that nothing about Rosa's death was as it seemed.

In May 2022, it was announced that the series would end with season four.