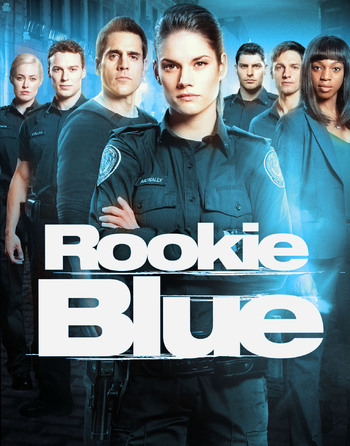 They're just trying to get through the day.
Advertisement:

Rookie Blue is an ABC (Global in Canada) series focusing around five new rookies assigned to Division 15 straight out of the academy. The show focuses a lot more on the personal lives of the rookies than other crime shows, and has been described as "Grey's Anatomy with rookie cops".

It follows their introduction to real policing under the guidance of the senior officers and detectives at Division 15, and how they struggle to cope with the toll the job takes on them and their lives. While there is a main character, Andy McNally (Missy Peregrym), the show utilises its ensemble cast very well and every episode will follow each of the rookies and some of the senior officers. The series is one of handful of shows airing on US TV (Flashpoint being another) in which its Canadian setting is actually preserved.

The series ended in 2015, airing for six seasons. ABC and Global have stated that the sixth season serves as the show's finale.