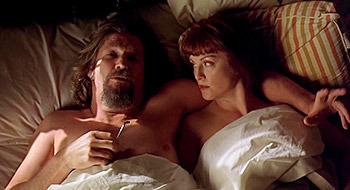 A couple, wearing pajamas (or not), discussing stuff with each other in bed, often right after sex.

Mainly a Sitcom trope nowadays, but serious instances have been around much longer; for example at the beginning of the medieval Irish war epic The Cattle Raid of Cooley.

Not to be confused with Talking in Your Sleep (which is exactly that). Expect a Modesty Bedsheet. For more badass characters, it's a good time for a Scar Survey.