You, Get Me Coffee 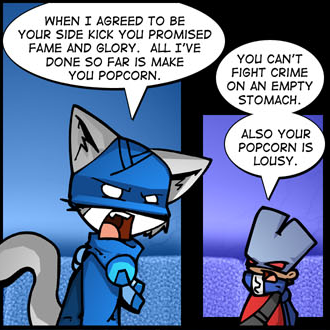 "See this hand? It should have a coffee in it. You have five seconds."
— The Funky Fisherman, Power Rangers Dino Thunder

This is it. Da Chief is having a Eureka Moment and sending out operatives on the Evidence Scavenger Hunt, where everyone has to pull their weight to reach The Summation. At the end of the line the starry-eyed kid waits for their instruction. This is their big chance!

"You, go get me some coffee. Cream, two sugars, and make sure the lid is tight."

And the dreams of the coffee-fetcher are quickly smashed. Understandably often done at the expense of the Butt-Monkey. Is not necessarily limited to caffeinated beverages, as it has been known to happen with lunch, office equipment, and various other demeaning and unimportant tasks. May overlap with Snipe Hunt if the task is

See also Stay in the Kitchen, where an entire gender is asked to get coffee, and Comically Small Demand. Sometimes played in situations where the coffee-fetching errand is as important as everything else, either because it's needed to help the problem-solvers function or because the activity solves the problem in a way that's not immediately obvious. Or sometimes, the coffee isn't important, but it's played that way because the coffee-fetcher is so naïve that he thinks any task from his boss must be important, or because it just looks that way from the perspective of the the lower decks.