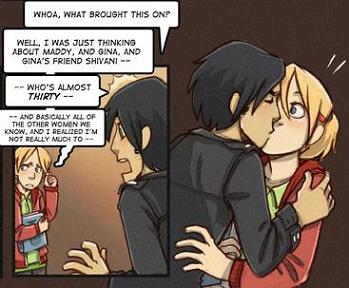 "A kiss is a lovely trick designed by nature to stop speech when words become superfluous."
— Ingrid Bergman
Advertisement:

Isn't it rude to interrupt someone mid-sentence by kissing them? Apparently not. Especially if you're dancing The Masochism Tango — skip the Slap Slap and get right to the kiss.

The cute version occurs when one character is babbling nervously, either because they get tongue-tied around the object of their affections or because they are trying to apologize for something, and the other cuts them off with a kiss to show that they understand. A wordless solution to Cannot Spit It Out.

May also be used on someone pointlessly rambling on, intentionally trying to evade said kiss. Saying "Shut up and kiss me!" is optional but not recommended. Which partner gives and receives is gender indiscriminate. Double points if it's the First Kiss. "Kiss me, you fool!" is the flirtatious variant, for when the partner hesitates too long.

Frequently a way to resolve Will They or Won't They? in favor of "They Will".

May lead to Post-Kiss Catatonia. Not to be confused (or at least not necessarily) with the "Take That!" Kiss. Often overlaps with Forceful Kiss.

The page quote is actually attested word for word as an old Iranian proverb.

Mark tries to explain a situation but gets interrupted by a kiss from his date.

Mark tries to explain a situation but gets interrupted by a kiss from his date.