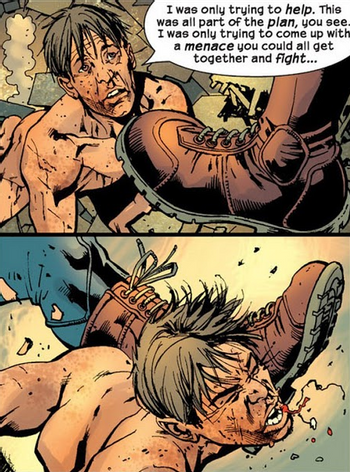 WARNING: Actual results may vary.
Bruce Wayne: People are dying, Alfred. What would you have me do?
Alfred: Endure, Master Wayne. Take it. They'll hate you for it, but that's the point of Batman. He can be the outcast. He can make the choice no one else can make: the right choice.
— The Dark Knight
Advertisement:

Sometimes to make a Heroic Sacrifice, a hero doesn't need to die. Sometimes they must sacrifice something else...their good name, reputation, and integrity.

A character attempting a Zero Approval Gambit will knowingly risk — or deliberately seek — a 0% Approval Rating and paint themself in a bad light in order to achieve some greater good. This might involve falsely confessing to a crime they didn't commit, or it might involve them being an enormous Jerkass contrary to their true nature of Jerk with a Heart of Gold or Hidden Heart of Gold. The net result is that they will be hated, hunted and/or disgraced for all time. In short, they willingly become a Hero with Bad Publicity. See also Self-Made Myth. Note that this isn't a short-term trick. A Zero Approval Gambit is usually permanent or takes a huge amount of work to undo.

This is an inverse of Villain with Good Publicity. Compare Good Is Not Nice, Necessarily Evil, Noble Demon, What the Hell, Hero?, Break His Heart to Save Him, and Hidden Heart of Gold. Can result in a Hero with an F in Good. Sometimes done to facilitate a Genghis Gambit. Often a job hazard of the Agent Provocateur. Most of the time it involves becoming a Silent Scapegoat.