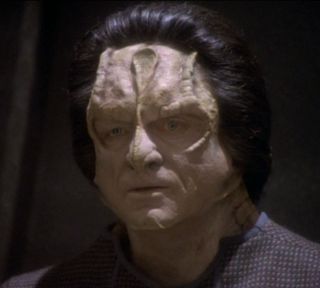 Gul Darhe'el...or is he?
Advertisement:

Kira and Dax are chatting casually when a ship containing a passenger (Harris Yulin) suffering from Kalla-Nohra syndrome docks at the station. That disease is only suffered by people who were at a brutal Cardassian work camp during the occupation of Bajor, so Kira heads down to pay her respects. She's shocked to discover that the patient is a Cardassian, so she promptly arrests him as a war criminal.

The Cardassian, Aamin Marritza, claims that he does not have Kalla-Nohra, but instead a similar disease that was mistaken by the transport doctor he was traveling with. This is quickly dismissed, and he admits that he was a simple file clerk at the camp who had nothing to do with the crimes committed there. During Kira's questioning of him, a drunken Bajoran is released from holding muttering about being imprisoned with "one of those."

While Sisko faces pressure from the Bajoran Government to hand Marritza over for trial, he holds off while he attempts to verify his identity, which is tricky because the Cardassians destroyed most records of their atrocities. Sisko warns Kira that he intends to release Marritza if his story checks out. Using the only picture they have from the work camp, they discover that their prisoner looks nothing like Marritza… but he is a spot-on match for Gul Darhe'el, the camp's infamous administrator.

Confronted with this, he admits that he is Gul Darhe'el and gives a long boastful confession about how much fun it was to slaughter Bajorans. He starts taunting Kira with her own actions during the war, saying that her Shaakar resistance cell was insignificant. With this, it looks like he will be handed over to Bajor for trial and execution, but something's amiss. Odo suddenly wonders how Darhe'el knew about Kira's war history.

With this loose thread to sort out, Odo gets in contact with Gul Dukat, who provides surprising information: Gul Darhe'el died six years ago and was buried under one of Cardassia's largest military monuments in a state funeral (which Dukat attended). Further investigation reveals that Darhe'el was not even on Bajor the day of the mining accident and so could never have contracted Kalla-Nohra. But why would someone lie about being Darhe'el? Odo digs even deeper and discovers that their mysterious prisoner spent a considerable amount of time researching Kira, and he has been taking medication for the aftereffects of surgical alterations.

Once again, Kira confronts the prisoner with the evidence, accusing him of being Marritza after all and trying to pass himself off as Gul Darhe'el. The prisoner vainly tries to cling to his deception, trumpeting that he is Darhe'el, evil and immortal, while the pathetic Marritza was a trivial coward who cried himself to sleep at the sounds of the horrors he was unable to stop.

Eventually Marritza breaks down, admitting his identity and his motives. He believes that he deserves to die for his cowardice, while Cardassia needs to confront and acknowledge its crimes with a very public trial of one of their most wicked war criminals. Despite Marritza's pleas that she help him see his plan through, a moved Kira refuses and releases him, saying that enough good people have died, and she won't help kill another.

Kira arranges transport for Marritza to return to his home, saying Cardassia needs good men like him if it's ever to reform. As they head for this transport, the drunken Bajoran from earlier comes up and stabs Marritza in the back. As Kira cradles him as he dies and demands to know why the murderer did it. He proclaims that simply being a Cardassian is reason enough to kill them. Kira tearfully states, "No... it's not!"