The trope example pages below contain unmarked spoilers for Danganronpa: Trigger Happy Havoc and Danganronpa 2: Goodbye Despair. You Have Been Warned! 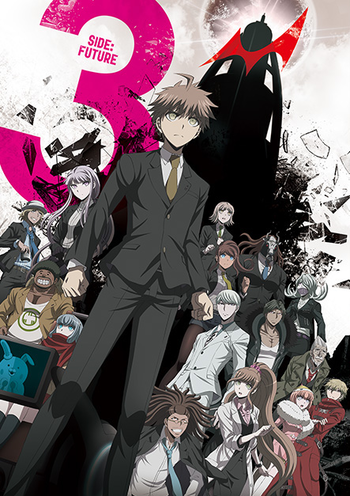 The beginning of hope, the end of despair. 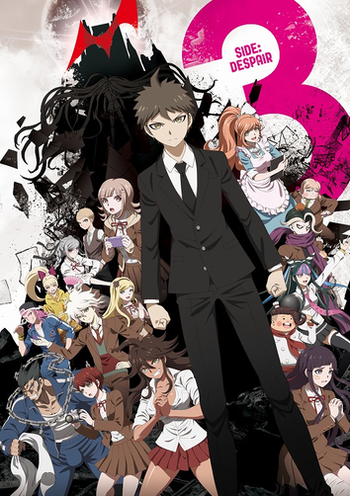 The Tragedy is about to begin.
"Every story has an end! This'll be ours."
— Monokuma
Advertisement:

The world continues to suffer from the aftermath of "The Biggest, Most Awful, Most Tragic Event in Human History". The forces of "Ultimate Despair" launch terrorist attacks without reason or ransom across the globe, purely as a means to cause despair. Opposing them is the Future Foundation, an organization founded by the elite graduates of Hope's Peak Academy.

Makoto Naegi, the hero of the School Life of Mutual Killing, is called to trial by the leaders of the Future Foundation. He is accused of betraying the organization by rescuing fifteen of the most notorious members of Ultimate Despair and granting them safe haven. As the leaders argue over his guilt, their headquarters is suddenly attacked and everyone inside is knocked out with gas.

The sixteen senior members of the Future Foundation are trapped in the foundation's island headquarters and forced to play a final killing game, hosted once again by Monokuma, that will decide the fate of the world. Every two hours, everyone is injected with a sleeping drug except for a designated "attacker", who is given a time limit to murder one person of their choosing. If no-one is dead when everyone wakes up, then all of the survivors will be allowed to leave. Furthermore, each participant has a unique "Forbidden Action" that will kill them if performed, such as "running in the hallways". With their actions broadcast to the world, the Future Foundation is pitted against each other in a battle to identify the murderer within their ranks and secure a future of hope for the world.

Aired in the Summer 2016 Anime season from July 11 to September 29, 2016, the anime is uniquely split into two separate series. While Future Arc tells the story of the Future Foundation's killing game, Despair Arc is a prequel to Danganronpa: Trigger Happy Havoc and Danganronpa 2: Goodbye Despair that reveals the events leading up to "The Biggest, Most Awful, Most Tragic Event in Human History" and how they connect to Future Arc, with both series concluding on the shared finale of Hope Arc. In May 2016, it was revealed that a new manga series called Killer Killer was actually an official side-story to Danganronpa and was thereafter rebranded as such.