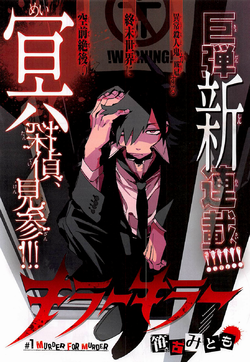 At the end of the world, an abnormal killer runs rampant...
Written by Yuichirou Koizumi and drawn by Sasako Mitomo, Danganronpa Gaiden: Killer Killer is a Spin-Off work within the Danganronpa universe, specifically tying into Danganronpa 3: The End of Hope's Peak High School. When it was initially launched in March 2016, the manga was advertised and presented as a separate work, but was eventually revealed in the third chapter as being in the same universe and subsequently rebranded.
Advertisement:

Set after the Worst, Most Despair Inducing Incident in the History of Mankind, the story focuses on Misaki Asano, a young woman who is assigned to the Future Foundation's 6th branch, dedicated to murder investigations. On her first day, Asano is partnered with Takumi Hijirihara, a sardonic, lazy investigator who seems worth nothing. In reality however, Hijirihara hides another side, he was caught in a massacre incident in middle school that left him scarred with a disturbed obsession with murder, which he takes out on other killers. Despite his eccentricities, the two become friends, and find themselves on the path of the Future Foundation's darkness...