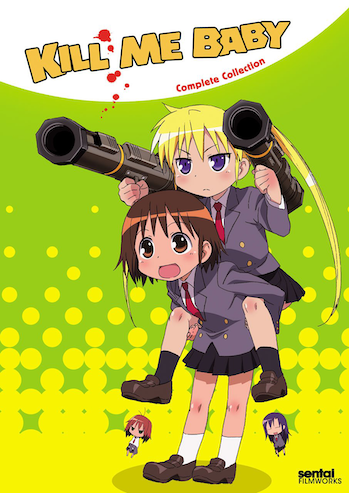 Despite the disturbing title, Kill Me Baby (or Baby, please kill me depending on the translator, though the anime adaptation uses the former as the main title, and both in the eyecatches), is a Yonkoma gag strip created by Kaduho and serialized in Manga Time Kirara Carat since 2008, revolving mostly around slapstick humor.

Yasuna Oribe is an airheaded high school girl who tries to greet a new student one day, only to discover that she's brutally efficient at twisting her arm, putting her in a chokehold, and using other painful methods of submission. She later learns that the girl's name is Sonya, and she works for an unnamed organization as an assassin. As the manga continues, Yasuna fluctuates between trying to warm Sonya up to living the life of a normal schoolgirl and occasionally trying to one-up her in various tests of skill. Both methods often end in failure, but it doesn't stop Yasuna from trying.

An anime adaptation was green-lit for the Winter 2012 Anime season. It started airing on January 5, 2012.

Everybody who is a fan of dark slapstick comedy should check this out.

Sentai Filmworks acquired the licensing rights for the show and released an English dub.

Tropes presented by the series: