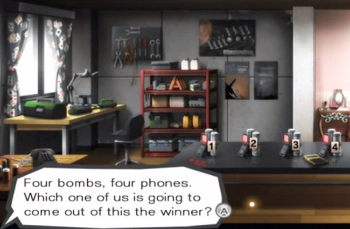 Put the wrong code in any of the four phones or try to leave early...
"I pull that trigger two seconds earlier and Wallenberg would be here to see his kid play. Instead, I got some dead man robbing jewelery stores and sending me haikus."
— Agent Fox Mulder (having read that Fox can't guard the chicken coop), The X-Files, "Young at Heart"
Advertisement:

Not only do the detectives oblige the nutter and follow his breadcrumb trail, they tend to give up all conventional routes of investigation. Usually they are the minutest step behind their quarry right until the end. Sometimes the criminal wishes to distract or trap the detectives, sometimes they want them to uncover some other truth along the way, but usually they're just being a real smartass. Sometimes the clues are hidden in the Serial Killer's Calling Card or in its gruesome souvenirs. There is often a Breaking Speech (or "The Reason You Suck" Speech) and a Kirk Summation (or "No More Holding Back" Speech) exchange between The Protagonist and antagonist some time before the climax.

The criminal will often warn the investigators that there will be consequence for cheating on the game.

Can overlap with Absurdly High-Stakes Game and a Life-or-Death Question.

These people often enjoy wordplay. Anagrams abound, as well as sentences with a carefully designed second meaning, and proper nouns which are conveniently also real words. ("Wait a minute, does he mean Jim Trashcompacter?")