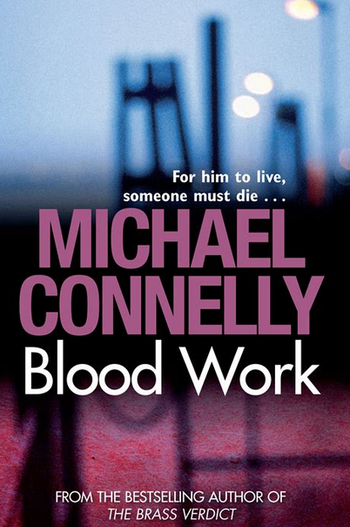 Blood Work is a 1998 novel by Michael Connelly.
Advertisement:

It is one of only a handful of Connelly novels that features neither his main protagonist Harry Bosch or his secondary protagonist Mickey Haller. Instead the hero is Terry McCaleb, a former FBI agent who used to hunt serial killers. "Former" and "used to" because McCaleb suffered a heart attack while still in his mid-forties and eventually had to have a heart transplant.

Retired from the FBI due to his disability, McCaleb runs a charter fishing business in the waters around Carrillo Marina in Los Angeles harbor. One day he is approached by Graciela Torres, who tells him some shocking news: her sister Gloriana Torres was the person who donated the heart, and the heart was only available because Gloriana was murdered during a convenience store robbery.

Graciela asks Terry to do what the cops can't, namely, find her sister's killer. Terry takes the job reluctantly, as it has been barely two months since he was released from the hospital following transplant surgery. He soon finds a far darker crime than he suspected, one which has a surprising connection to him.

In 2002 Connelly's novel was adapted into a film, also called Blood Work, featuring Clint Eastwood in his last action movie role. Connelly brought back the Terry McCaleb character in A Darkness More Than Night, in which McCaleb is teamed up with Harry Bosch.