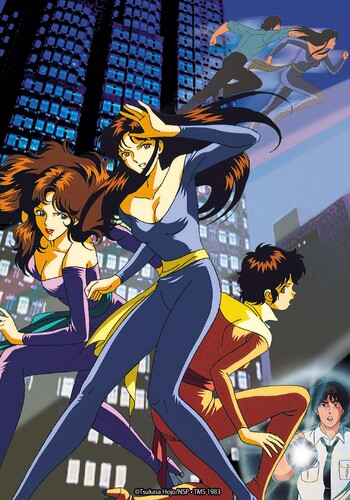 Cat's Eye (original title キャッツ・アイ) is a manga by Tsukasa Hojo (who would later create City Hunter) published between 1981 and 1985 and adapted to anime format by TMS Entertainment from 1983 to 1985.

The three Kisugi sisters are at first sight perfectly normal young ladies who run a cafe. In fact, they are the daughters of famous German artist Michael Heintz, who disappeared several years ago, and at night they turn into cat burglars to steal the works of art he created (which, more often than not, were acquired illegally by their owners). Their hope is to assemble their missing father's entire oeuvre in order to find clues as to his whereabouts.

Their modus operandi is to announce their forthcoming passage by leaving a Calling Card. Every time, the police will deploy forces in order to catch them, and every time they evade capture and make off with the work of art they were after. It helps that the police detective assigned to their case is, in fact, middle sister Hitomi's boyfriend; while he has no idea of the sisters' nighttime activities, he unwittingly helps them stay one step ahead of law enforcement by talking too much to Hitomi.

The girls reappeared in City Hunter: Shinjuku Private Eyes, marking their first on-screen appearance in decades, complete with Keiko Toda and Chika Sakamoto reprising their roles as Hitomi and Ai.note Toda took over for Rui as well due to Toshiko Fujita's poor health and eventual death in 2018. Philippe Lacheau, the French director of the live-action film City Hunter: The Cupid's Perfume, has a crossover sequel project with Cat's Eye in store, meanwhile. In Fall 2022, it was announced that an animated crossover between Cat's Eye and Lupin III would be dropping in 2023 as a Prime Video exclusive, with Keiko Toda once again returning as Hitomi.

Both seasons of the anime are now streaming on Retro Crush and Prime Video. Discotek Media has licensed the series for release on Blu-ray.

For the character sheets, go here.

For other works by the name Cat's Eye, go here.