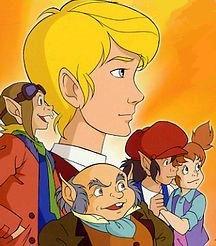 The Littles were the title characters of a series of children's novels by American author John Peterson, the first of which was published in 1967. Peterson's books were adapted into The Littles animated series by D.i.C Audio-Visuelnote At the time, the name was originally written as an acronym. and TMS Entertainment (until season 3, which was animated instead by Studio Gallop). In 1985, an animated feature film called Here Come the Littles was released, and the television show ran on ABC Saturday mornings from September 10, 1983, to November 2, 1985. It ran for three seasons, comprising 29 episodes.

Similar to Mary Norton's earlier novel The Borrowers, The Littles features a family of tiny but intelligent humanoid creatures with mouse-like features (the Littles) who live in a house owned by the Bigg family. The mouse-like features include a long, furry tail, long teeth and mouse-like ears. (In the books, only the tail is present, and there are no mouse-like features - mice are in fact deadly enemies of the Tinies.) Their height is 4–6 inches.

Wait, wouldn't a human medicine be far too strong for a Little?

Wait, wouldn't a human medicine be far too strong for a Little?