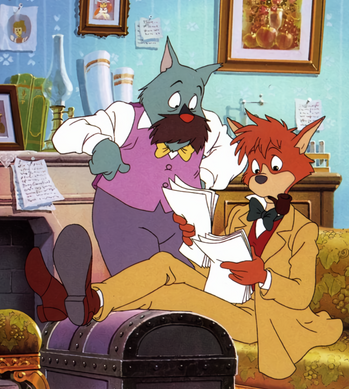 A co-production between the Japanese studio TMS Entertainment and the Italian channel RAI, Sherlock Hound (a.k.a. Meitantei Holmes) is a Funny Animal adaptation series of the Great Detective Sherlock Holmes, featuring the characters... as dogs! Hayao Miyazaki, famous for his work with Studio Ghibli, directed six episodes of the series, starting in 1981.
Advertisement:

Unfortunately, there were problems with Sir Arthur Conan Doyle's estate, which led to a suspension in production after only six episodes were completed. By the time the issues were resolved, Miyazaki had turned to Nausicaä of the Valley of the Wind, never to work in TV again, and the remaining episodes were directed by Kyosuke Mikuriya. The complete series was finally broadcast on TV Asahi from 1984 to 1985. Episode 11 (one of the Miyazaki episodes) actually aired in the U.S. before it aired in Japan, as it had been dubbed into English in 1982 by TMS and aired on HBO in late 1983 as The Adventure of Sherlock Hound, which marked possibly the first ever U.S. TV broadcast of a Miyazaki work.note HBO would also later air the Miyazaki-despised original English dub of Nausicaa, Warriors of the Wind. Episodes 5 and 9 were also screened in Japanese cinemas in a double bill with Nausicaa, several months before making it to Japanese TV.

This anime is really a Lighter and Softer interpretation of Sherlock Holmes, but there are really awesome moments (especially in the episodes made by Miyazaki). If you like anime with more innocence and more of a sense of adventure than fighting, like those of Studio Ghibli, you will like this one.

The series is not related to the children's novels by Karen Wallace, which have a similar premise. Also, this series, despite the name, isn't adapted from The Hound of the Baskervilles.

Discotek Media has released the series on home video.