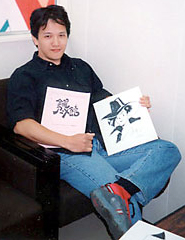 The man who changed the face of Telecom, even more than Hayao Miyazaki.
Advertisement:

Born in 1960, Toshihiko Masuda is one of the major directors at Telecom Animation Film. He joined with Telecom in 1980 as a in-between animator and became a director in 1983, taking over Hayao Miyazaki's unit after he left to go work at Topcraft to do Nausicaä of the Valley of the Wind. Masuda is known for his wacky and fluid animation, and is the one who set the style in Telecom's western productions in the '80s and '90s.

Productions worked on by Toshihiko Masuda:

open/close all folders
80's work
90's work
2000's work
Side Note: Due to other studios outsourcing varying amounts of work to Telecom by this time, not everything will be listed from here on. For a slightly more extensive list, click here