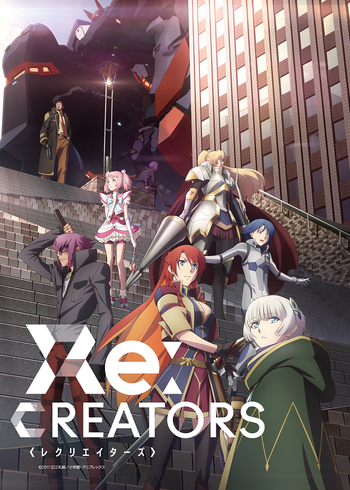 Sota Mizushino's life is changed forever when he meets Selesia Upitilia, the protagonist of his favorite anime. She saves him from the mysterious Military Uniform Princess and he tells her that she is actually a fictional character who has come to life in the real world. Now, Sota and Selesia must gather the other characters that have arrived into the real world and save their worlds from total destruction.

Re:CREATORS is a Spring 2017 original anime by Studio TROYCA. Created by Rei Hiroe, the mangaka behind Black Lagoon and directed by Ei Aoki of Fate/Zero and Aldnoah.Zero fame. Re:CREATORS follows a group of fictional characters that travel to our world and search for their creators. The first episode premiered on April 8th, 2017.

The anime created three spin-off series of its own — Re:CREATORS Naked, which showcases Aoki's original draft, Re:CREATORS One More, which follows a relatively normal otaku girl and her friends living through the events of the series, and Chikujouin-san is Too Merry, which gives Magane A Day in the Limelight.

No relation to Re:Zero.