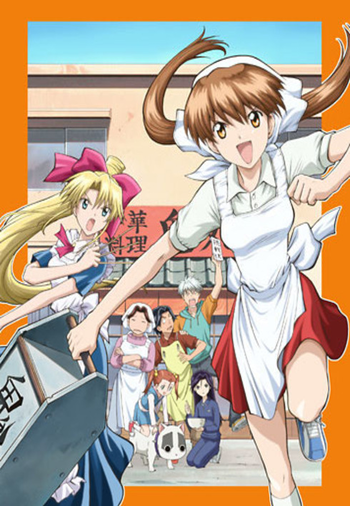 Hanami Town Shopping District is a small, but busy marketplace with three not-so-ordinary establishments: the Onimaru Chinese Restaurant,the next-door Yaoguro Grocery Store, & Huet Bakery across the street. Having a day in this little shopping district that could be described as "normal" is unlikely.

Miki Onimaru, twenty-year-old poster girl of Onimaru, is an easily distracted, overly violent girl with only her mother Makiko to rein her in (usually with a beatdown). Megumi Kannazuki, also age twenty, owner & poster girl of Huet, puts on a sweet face while hiding a cruel personality. Kankuro Nishiyama, age 24, comes home after finishing college to finally get back at Miki for bullying him in their younger years. A few blocks down lives Wakana Endou, a sweet kid with a rough dog named "Toshiyuki". And last but not least is Akihiko Ohta, owner of Yaoguro, the only paragon of sanity in the block (and even then he has his wild side). These are their stories.

Being a Deconstructive Parody of the Fighting Series, Ramen Fighter Miki (Muteki Kanban Musume note lit. "Invincible Poster Girl") is a 17-volume manga series by Jun Sadogawa which was serialized in Weekly Shonen Champion from 2002 to 2006, with a North American release under ADV Manga. A 2006 12-episode anime adaptation also aired as part of the Summer 2006 Anime lineup. Following the end of the manga, a 5-volume sequel was released between 2006 and 2008, called Muteki Kanban Musume Napalm, in which the cast is extended by the employees of the Tekkotsudo Megastore, which threatens the shopping district.

Tropes in Ramen Fighter Miki include: