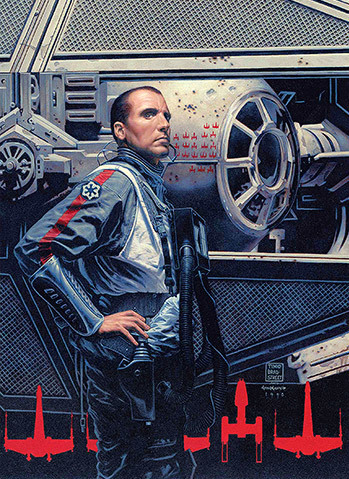 "I heard a rumor that Vader had his TIE prototype made to stop this guy from vaping him in simulator battles."
"Rudel flew 2,530 combat missions claiming a total of 2,000 targets destroyed; including 800 vehicles, 519 tanks, 150 artillery pieces, 70 landing craft, nine aircraft, four armored trains, several bridges, a destroyer, a cruiser, and severely damaging the Soviet battleship Marat."
— Wikipedia, on Hans-Ulrich Rudel, aka The Eagle of the Eastern Front
Advertisement:

In Real Life, an ace is technically a pilot with five or more kills. This is harder than it sounds; even in conflicts like World War II, where aerial combat occurred on a vast scale, the average fighter pilot had zero confirmed kills from the day he got his wings to the day he bought his farm. In World War II, only about 5% of pilots made ace, and they were responsible for 50% of all air-to-air kills. The term is most commonly associated with aircraft pilots, but other types, such as tank aces, also exist. As well as anyone has been able to determine, aces are born, not trained.note Indeed, most Air Force combat training is in how to avoid getting shot down. Ace pilots are common in fiction, most prominently in mecha shows and any Space Opera featuring space fighter planes. They tend to be more prominent in Real Robot shows, where the mecha themselves are fairly equal and the pilot's skills are more important, than in Super Robot shows, which place more emphasis on the power of the mecha.

An ace pilot will likely display all sorts of Improbable Piloting Skills, such as the High-Speed Missile Dodge. Aces may or may not come with wingmates. They will often have Machine Empathy, allowing them to sense problems from subtle differences in how their craft moves/feels/sounds, especially if flying their Ace Custom. Depending on the time period, may wear an Adventurer Outfit. An Ace who excels even beyond other aces is known as an Ace of Aces, a title typically granted only to a nation's highest scoring ace.

An ace pilot is not necessarily The Ace in terms of personality, although they can be. Famous aces may be given a cool-sounding nickname like, oh, say, the Red Baron. They also may only be Graceful in Their Element, and are (though not The Klutz) plodding on land.

Note that Improbable Piloting Skills or Improbable Aiming Skills do not guarantee anyone becoming an ace. The most important factor is luck; that is, to actually meet enemies and face them in the air. In WWII, only 50% of American fighter pilots ever met Axis airplanes in the air. On the other hand, in a target-rich environment, such as that which the RAF faced at Malta, any pilot will eventually become an ace if he survives long enough. The second important factor is rank: it must not be too low nor too high. Most kills are scored by flight and squadron leaders. Ranks below First Lieutenant usually serve as wingmen, while Lieutenant Colonel and higher ranks are usually preoccupied with desktop jobs. Many pilots have actually refused promotion in order to be able to fly and score victories.

Note that wingmen also may themselves be aces, especially if they fly in target-rich environment. Sometimes aces prefer to fly together as each others' wingmen. This is known as Fat Cat Flight.

Note that fights against other veterans are usually a better indicator of an ace's style than battles against Mooks, who can generally be taken out with little effort.

Another classification, coming from the Finnish Air Force, is differentiating pilots who fly with their "brains" versus pilots who fly with their "muscles". Those who fly with their brains usually have superb mathematical and 3D skills, being able to manage the situation like a computer and form a clearer view of the chaotic scene of battle. They are excellent shots and who do not take unnecessary risks but rather attempt to attack the enemy from his blind spots and break off ASAP. Those who fly with their "muscles" are superb pilots, extremely aggressive, prefer dogfights and maneuvers, and are good with aerobatics but not necessarily crack shots. Either can become aces. "Bushwackers" and "snipers" are "brain" pilots while "steamrollers" and "pluggers" are "muscle" pilots. The difference is best illustrated by the von Richthofen brothers: Manfred (the original Red Baron with 80 kills) was a "brain" pilot, while his little brother Lothar (with 40 kills) was a "muscle" pilot.

Civilian examples exist as well, and not just for aircraft. While civilian pilots, obviously, don't technically meet the military definition because the goal of civilian flight is to not kill people (which means most who weren't military before do not have kills), some civilian pilots have saved lives and property with overwhelming skill and capability, overcoming multiple engine failures, hydraulic failures, or many other incidents which would fall under No One Could Survive That!.

Most of these are from the two World Wars, for obvious reasons. Some, however, are from the Arab–Israeli Conflict, the Korean War and The Vietnam War. We have yet to get an ace from the current century, as most current conflicts don't involve air combat. And the few that do involve air combat have been Curb Stomp Battles, where the winning side massively outnumbers the loser, leaving far too few kills to go around for anybody to become an ace. However, there is a tentative, as yet unconfirmed possibilty that there now is at least one ace. See the detail below.

Civilian examples are pilots who, through training, skill, and capability, have saved multiple lives either on their planes or on the ground, or both. As mentioned above, technically they don't fit the military definition of an ace because they saved lives rather than took them, but that takes nothing away from their skill — in fact, that some of these pilots accomplished maneuvers that their craft should not be capable of, under conditions like complete engine failure and complete hydraulic system failure and power failure makes them even more the trope.