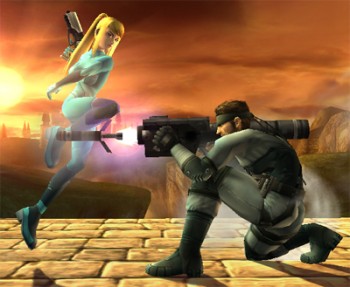 "Training for SAM launches up to this point had been more or less book learning, recommending a pull to an orthogonal flight path 4 seconds prior to missile impact to overshoot the missile and create sufficient miss distance to negate the effects of the detonating warhead. Well, it works. The hard part though, is to see the missile early enough to make all the mental calculations."
— Mike Kopack, Gulf Mission

This is quite similar to Cutscene Power to the Max in that it showcases a character's sheer skill, or the abilities of their Cool Vehicle.

A swarm of seeking projectiles is flying right at a character, and they're almost certain to be rendered into a fine paste by the attack ... but through an extreme display of evasive maneuvers, the character escapes without the slightest scratch. Sometimes the dodging is merely swerving from side to side or taking sharp turns, sometimes it's done like in Macross, where the pilot puts his Valkyrie through aerial acrobatics that would logically cause unbearable G-forces. At other times, the pilot maneuvers so as to cause the missiles to hit each other and explode, or supplements his evasive maneuvers with the use of some weapon to actually shoot down the missiles instead of being Point Defenseless (but merely being able to shoot down missiles doesn't make for a High Speed Missile Dodge).

Although High Speed Missile Dodging can and does happen in Real Life, real-world anti-aircraft missiles are designed to not actually hit the target, but instead explode in close proximity to it and fill the entire vicinity with high-velocity shrapnel. Thanks to the Rule of Perception, though, most anti-aircraft missiles in fiction only damage targets if they hit directly.

Aircraft pilots in Real Life have two basic tactics for dodging missiles; the most common method, as described in the opening quote, is to maneuver the aircraft in such a way that the missile overshoots—so that when its warhead explodes, the shrapnel from the blast won't actually impact the intended target. There are several methods for accomplishing this, depending on the situation and the kind of aircraft involved. Even the massive B-52s are capable of using this tactic to defeat missiles.

The other tactic is pure speed; some aircraft are (or were) capable of successfully outrunning air-to-air missiles, such as the MiG-25 and the SR-71 Blackbird

, whose official missile evasion procedure was "just go faster, duh" (lightly paraphrased). In this case, it's less about the pilot's skills and more about the abilities of the aircraft itself.

May not work against a Super-Persistent Missile. Compare the Wronski Feint, which uses the local landscape as an accessory. The same skills used in dodging missiles are also handy for dodging lasers. See also Smoke Shield, where it's sometimes implied that although the missiles exploded, the character dodged while obscured from the camera. See also Misguided Missile, where the missiles are led back to their launcher or into each other. On a smaller scale there's Dodge the Bullet, which is about, well ... dodging bullets.