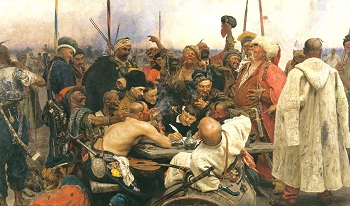 Reply of the Zaporozhian Cossacks to Sultan Mehmed IV of the Ottoman Empire, also known as Cossacks of Zaporog Are Drafting a Manifesto, painted by Ilya Repin between 1880 and 1891.
Advertisement:

Cossacks were groups of professional warriors first recorded as a separate group of society in Eastern Europe around late 15th century. Russian Cossacks are typically seen as agile cavalry armed with lances and sabres, while Ukrainian Cossacks mostly fought on their feet and were notorious for their mastery of musketeer tactics.

There were two main groups of cossacks:

Other groups included the Terek Cossacks, Ussuri Cossacks, Ural Cossacks, etc. Cossacks were exempt from tax and were granted some land in exchange for military service, and as such considered minor nobility (that was especially the case with Registered Cossacks in Polish-Lithuanian Commonwealth). Cossack settlements were called "stanitsa" in Russia and "sloboda" or "zymivnik" in Ukraine. These settlements enjoyed higher liberties than common villages, e.g. a serf who managed to join the Cossacks was free from his former owner's pursuit.

In the 16th century, a group of Don Cossacks led by the famous ataman Yermak embarked on a campaign to conquer Siberia. Yermak perished during this campaign, but it started the Cossack colonization of the Siberian frontier, and Siberian cossacks becoming a new large Cossack group.

Some 17th century Cossacks were also pirates who sailed the Black and Caspian seas. The most famous Cossack pirate was Stepan Razin, later well-known as an anti-Tsarist rebel.

Unlike the regular Imperial Russian Army units which had to submit to slavelike discipline (the Imperial Russian Navy was even worse in this regard), Cossacks enjoyed a much higher level of personal initiative and autonomy, due to their traditions of quasi-independence summarized in the proverb bow down to no one save the God and Emperor himself. This strengthened their Proud Warrior Race spirit and during the early stages of World War I they enjoyed a well-deserved reputation for courage and ruthlessness.

During the Civil War, the Cossacks divided; the poorer ones fought for the Reds, the richer ones for the Whites, though there were also the idea of independent Don and Kuban Republics. In Soviet Russia, the Cossack hosts were eliminated in 1920. During WWII some old Cossack commanders from the Civil War supported the Nazis (and were recognised as "Ostrogoths" by Hitler's regime to mask the idea of working together with the Slavs), while Soviet Union also "restored" old Russian Cossack Hosts, even though these were mostly formed from new guys, with many Cossacks eliminated under Lenin's purge of counter-revolutionaries or fled outside, as much more Cossacks joined the White Army (as most of them were complacent to the Imperial policy to respect the Cossack's free and autonomous lifestyle, in contrast to ill-treated sailors in which lots of them joined the Reds) and Ukrainian anarchists led by Nestor Makhno.

After World War II ended and horse cavalry were rendered largely obsolete, the Cossack units who fought in the Red Army were dismissed once again and lived as farmers, entertainers, and craftsmen, although their martial traditions makes them a preferred stock for military service and they fought in Afghanistan in contemporary military units. The fate of Nazi Germany-aligned ones were far worse, as after they surrendered to the West they were simply handed back to Soviet forces, facing treason charges, albeit a number of them were White emigrants (anti-Bolshevik Russians who moved abroad after the Reds won the 1917-1922 civil war) which were never citizens of the Soviet Union to begin with. Their main German handler Helmuth von Pannwitz chose to share the fate of his men rather than running away from it.

After the fall of Soviet Union many organisations yearned for the restoration of Cossack culture. Today, the "Cossack organizations" exist, but up until recently have had little military or law-enforcement powers, other than the right to bear sabers in Russia, or acting as some honorary mounted policemen functions in Ukraine. In some cities and towns they patrol the streets as voluntary police assistance corps, still relying on cadre policemen for paperwork and with tacit or explicit consent from the official police force. Unsympathetic outside observers have warned that the Russian Cossack ethos, of conservative obedience to authority, Church and hierarchy, together with violence against demonstrators and those protesting against Vladimir Putin's administration, places them in Right-Wing Militia Fanatic territory. The public whipping of "Pussy Riot" female dissenters by uniformed Cossacks, whilst the regular police stood by and did not intervene, was recorded on camera and seen around the world.

Still, the Cossack Hosts, while being mostly a farce movement nowadays, greatly influenced the history and culture of Eastern Europe. Dnieper Cossacks formed the basis for the creation of the modern Ukrainian nation and culture, while Russian Cossacks created a separate ethnographic group in South-Western Russia, with culture and traditions that persist to this day. A lot of Cossacks from the Don host native to the Donbas region and the Kuban host descended from the Zaporozhian Cossacks fought in the Ukrainian civil war that started in 2014 on the pro-Russian side.

Nowadays in popular culture, the Cossack look has been the primary image that pops in foreigner's minds when they think of what Russians look like (The same way Americans are Cowboys). This is due to the fact that the iconic Cossack hats and dance are closely associated with Russians in movies abroad (these days however, it shares that spot with Dirty Communists).