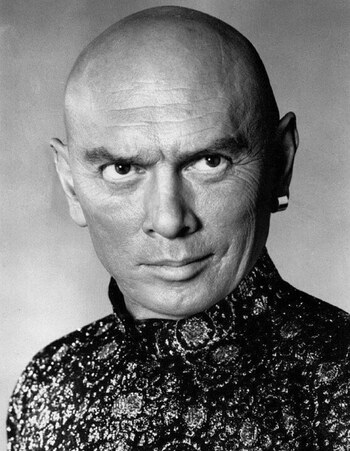 "I really wanted to make a commercial, when I discovered that I was that sick, and my time was so limited. I wanted to make a commercial that says simply, 'Now that I am gone, I tell you: Don't smoke. Whatever you do, just don't smoke.' If I could take back that smoking, we wouldn't be talking about any cancer. I'm convinced of that."
— Excerpts from Brynner's appearance on ABC's Good Morning America on January 7, 1985, his final interview.
Advertisement:

He was born in Vladivostok, though after his father left the family, his mother took him to Manchuria and Paris before they moved to the USA in 1940. During World War II, Brynner used his French language skills to broadcast American propaganda to occupied France. He became an American citizen in the 1940s and began working as an actor and model.

Brynner's Star-Making Role was as King Mongkut of Siam in The King and I, which he first played in 1951 and would play 4633 times, not only on stage but also in the Live-Action Adaptation and a TV version. Brynner would end up winning both a Tony and an Oscar for this role. It was for this role that he shaved his head, and the bald head would become Yul Brynner's iconic look.

He also starred in 1956 as Pharaoh Ramses in The Ten Commandments. As Charlton Heston was much taller than him, Brynner decided to bulk up for the role, and delivered an imposing performance as the Pharaoh. He would continue to star in epics through the 1950s, 1960s, and early 1970s.

Brynner's last major role was as the Gunslinger robot (who at his request wore the same clothes as his character in The Magnificent Seven) in the 1973 film Westworld, and a cameo in its sequel Futureworld (1976). Sadly, his smoking habit caught up to him, and he died of lung cancer in 1985. While wrapping up his career, Brynner's final wish, as mentioned above, was to make a Public Service Announcement to be run after his death to tell others not to make that mistake; at the proper time, the American Cancer Society honored his wish

Yul Brynner remains one of the most distinctive-looking (and sounding) Hollywood actors, and to this day his image is shorthand for badass. Among his influences is that he inspired the look of Professor X of the X-Men comics.

Tropes related to his work: