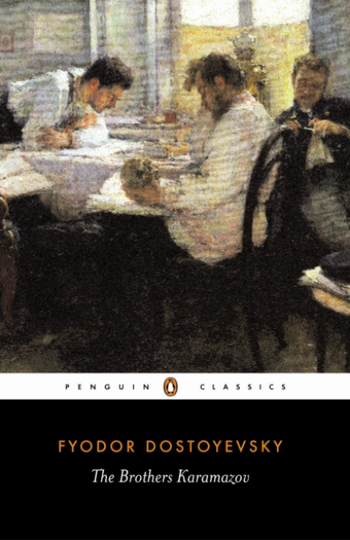 Alexei Fyodorovich Karamazov was the third son of a landowner from our district, Fyodor Pavlovich Karamazov, well known in his own day (and still remembered among us) because of his dark and tragic death, which happened exactly thirteen years ago and which I shall speak of in its proper place.
Advertisement:

The Brothers Karamazov was the last novel by Russian author Fyodor Dostoevsky, published in serial segments in 1880. It centers around the internecine conflicts of the Karamazov family, established in the novel's opening book:

The town is also populated with a whole cavalcade of interesting supporting characters, of which a few:

The novel's plot is mostly conveyed through a series of monologues and dialogues. Most of the monologues are to Alyosha, who, as mentioned above, is considered trustworthy by everyone. In the dialogues, characters debate any range of topics, most of the more interesting ones centering around questions of faith, guilt, free will, suffering, and temptation. These themes are played out as the tension between Dmitri and his father gradually grows, up to the moment one night when Fyodor Karamazov is murdered and Dmitri is arrested for it. From this point on, the mindgames and schemes that each character has been playing against the other begin to unravel as events take on a life of their own.

Adaptations of note include a 1958 Hollywood film starring Yul Brynner and William Shatner, a 1969 Russian film, and a 2009 12-part Russian TV series.

This book provides examples of: (warning: major spoilers ahead)