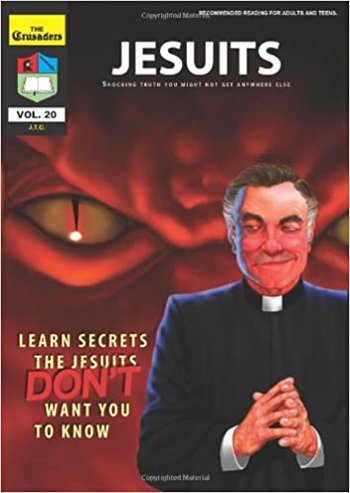 A character type generally found in works set or written in the The Cavalier Years, although some are later examples, this is what you get when you cross the Church Militant with Wicked Cultured. In Real Life, the Society of Jesus

, also known by their shorthand name "Jesuits", are a Christian (specifically, Roman Catholic) religious order known for their military character (reinforced by the fact that their founder, Basque nobleman Ignatius of Loyola

, was a knight who took the habit after having a spiritual awakening while recovering from wounds received in battle during the Italian Wars, in order to provide the Church an active arm in world affairs), their commitment to broaden Renaissance education, and their missionary endeavors. Among their religious opponents, chiefly the early Protestants, they accrued a reputation for finding clever arguments to excuse any kind of behavior. Common plots have such characters throw off their habit to assume the appearances of laity, sometimes becoming military leaders or advisers.

The historical basis for the Society's negative archetype comes largely from their work during the Counter-Reformation. For many centuries, the Roman Catholic Church relied extensively on secular authorities (especially the Holy Roman Emperor and, later, the King of France) to combat heresy by providing a civil basis for investigating unorthodox beliefs and/or practices and, if need be, administering appropriate civil action against the offending party. However, during the height of the Protestant Reformation, various governments in northwestern Europe declared themselves independent of the Church's spiritual authority as a precedent for their secular sovereignty, establishing either Lutheranism or Calvinism, the two Protestant sects deemed legal options as of the Peace of Augsburg in 1555, as the de facto, if not de jure, state religion. As a result, the Church was often without (legal) recourse to counter what they saw as the epidemic heresy of Protestantism in these regions, where Catholic and Protestant populations were often engaged in sectarian violence.

In light of these facts, as well as reforms created by the Council of Trent, which stressed using education as the most effective means of combating Protestantism, the Jesuits were often called upon to travel to states in which local Protestant rulers were repressing Roman Catholic populations, or at least disrupting ecclesiastical hierarchy, and engage in what essentially amounted to clandestine missionary work: supporting (often secret) worship, teaching doctrine, and ingratiating themselves with local ministers in order to encourage them to convert, or at least be lenient towards Catholics. Predictably, Protestant governments used their efforts as the occasion to propagandize against the Roman Catholic Church, promoting a view of it as foreign and reactionary, and Jesuits in particular as sinister subversive infiltrators spreading throughout Christendom, intent upon undermining or overthrowing legitimate local powers and destroying true (that is, Protestant) Christianity in favor of the reinstatement of the Papal Anti-Christ.

This trope doesn't just appear in Protestant works, though. The Jesuits also got a bad reputation in Catholic countries too, and were outright expelled from the Portuguese and Spanish Empires, albeit for different reasons. In the 17th century, the Jesuits—who swear an oath of loyalty and obedience to the Pope in addition to the standard religious vows—became identified with ultramontanism,

a doctrine that asserted the absolute supremacy of the Pope in all matters. Although this is largely standard Catholic doctrine today, there were many movements in Catholicism that opposed that kind of supremacy. Perhaps more significantly, ultramontanism challenged many Catholic rulers' rights to meddle in Church affairs, particularly the then-standard practice of letting Catholic monarchs choose the Church hierarchy with only a nominal papal veto. The Jesuits also gained a reputation for being power-seeking and economically successful, angering both temporal rulers and the higher-ups of the Church in Rome. The fancy logic and scholarship the Jesuits cultivated to beat Protestants in arguments could also be used to challenge Church orthodoxy—and it often was (and still is). The Jesuit activities in missionary work (which led to the not entirely incorrect accusation of running their own private empire) also triggered some good old-fashioned racism. While the Jesuit missions were far from perfect and rather paternalistic, they treated the Native Americans as basically people. Secular Catholic colonists in the New World generally would rather seize the Jesuit "Mission Indians" as slaves in the encomienda system, and considered the cheap native labor used in the Jesuit missions as economic competitors, leading to clashes. Altogether, these made the Jesuits distinctly unpopular in many Catholic countries for a time, especially from 1650-1850.