At Least I Admit It 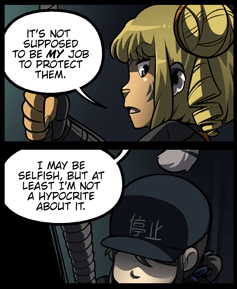 The hero has the villain cornered and calls him out on how his actions are evil etc., but the villain doesn't care if his actions are evil or not, because at least the villain isn't a hypocrite when it comes to his beliefs and/or philosophy. May be related to Villains Never Lie, and usually a sign of a Card-Carrying Villain. It sometimes can be a symptom of Evil Cannot Comprehend Good, at least when it indicates that the villain cannot understand why the hero is repelled by his/her behavior. On the other hand, it also shows that the evil character does understand good/evil enough to apply such concepts to both himself and the supposedly better people.

This trope can come in the form of the admission, "I may be X, but I'm your X".

The tactic is often used against other villains as well, particularly of the Villain with Good Publicity variety. It's not necessary for the villain to be accused; all they have to do is recognize their corrupt nature and calmly or proudly acknowledge it. Can be found in an evil version of the Knight in Sour Armor, but not necessarily so. It can also be a case of Even Evil Has Standards if the accused villain is the eviler of the two as well as a hypocrite.

This may be the result of Honor Before Reason, Blue-and-Orange Morality, or a simple dislike for hypocrisy or high premium placed on honesty relative to other virtues and flaws. It may also be used to claim that the Hero isn't so different and simply is in denial about it.

If presented positively, this can lead to a Hard Truth Aesop depending on the nature of their transgressions - someone who admits to being a jerk at least is aware of their flaws rather than simply being oblivious about their bad behavior, but embracing being Ax-Crazy isn't really a good thing. An alternate semi-positive presentation is that at least the Admitter is not guilty of Doublethink, Hiding Behind Religion, or some other case of lying about their actual beliefs, and in fact has standards that condemn such hypocrisy. A common heroic example is the Lovable Coward, who unlike his Dirty Coward counterpart fully admits to a lack of bravery and doesn't bully others to avoid being discovered as a coward.

If presented negatively, the Admitter is taken to be at least as bad if not outright worse than the other party because at least the other has reasons for their behaviour or needs some kind of excuse for their actions, while the Admitter is essentially confessing that they either don't need excuses or that their own reasons are just as bad as their misdeeds. It can also turn out that the Admitter is simply wrong or outright lying about being "honest" in the first place, either with others or with themselves, in either case earning them a Shut Up, Hannibal! from another character.

Discovering The Hero is not a Hypocrite but believes all that stuff about "justice" and "honor" can be... a shock. However, in many cases, the villain will claim that the hero's motivations are simply a convenient justification for violence or whatever other behavior the villain deems to be hypocritical. In some cases attempting to invoke this trope is exactly what ultimately turns others against them as they are now seen as simply using someones else's (real or imagined) hypocrisy as an excuse, which can be doubly damning for them if the whole crux of their argument is that they don't need excuses.

See also The Mad Hatter, Noble Demon, and "Not So Different" Remark. Also see I Take Offense to That Last One!, where a character objects to one of several criticisms but does not deny the others, and I Can Live With That, where a character accepts an accusation without specifically admitting or denying it. Contrast Your Approval Fills Me with Shame. It's Not Supposed to Win Oscars is the "artistic" variant. Lampshade Hanging and Self-Deprecation can also be used to convey this kind of thinking.

Bad Father To The Max

Bad Father To The Max