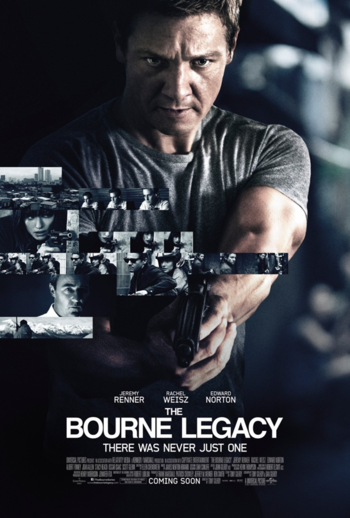 He's the new Bourne but without the inconsistency. In other words, he's Hawkeye but without the bow and arrow.
"We are the sin eaters. It means that we take the moral excrement we find in this equation and we bury it down deep inside of us, so that the rest of our cause can stay pure. That is the job. We are morally indefensible, and absolutely necessary."
— Eric Byer
Advertisement:

The one without Jason Bourne, The Bourne Legacy (2012) is the fourth entry in The Bourne Series, which was released on August 10th, 2012.

Matt Damon refused to make another installment unless Paul Greengrass (director of The Bourne Supremacy and The Bourne Ultimatum) was involved, and Greengrass insisted that he hadn't found a story good enough to merit a continuation of the franchise. As a result, the studio created the new character Aaron Cross, played by Jeremy Renner, and this Spin-Off movie was directed and written by Tony Gilroy, the scriptwriter of the first three movies. Cross is a trained operative much like Bourne and has to deal with the fallout as the government eliminates any programs linked to Blackbriar, eventually joining up with a female scientist from the same program. Edward Norton plays an official involved with the deeper aspects of the program trying to cover up the fine details. The movie takes place immediately after the events of Supremacy and Ultimatum.

This film was followed in 2016 by Jason Bourne, an actual sequel to Ultimatum, with Matt Damon reprising the titular role.