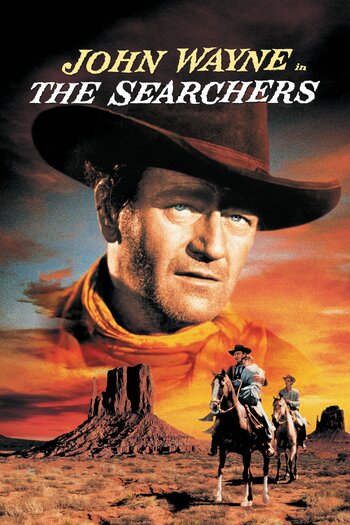 "Injun will chase a thing until he thinks he's chased it enough, then he quits. Same way when he runs. Seems like he never learns there's such a thing as a critter that will just keep comin' on. So we'll find 'em in the end, I promise you. We'll find 'em. Just as sure as the turnin' of the Earth."
— Ethan Edwards
Advertisement:

The Searchers is a 1956 Western film directed by John Ford, starring John Wayne, Jeffrey Hunter, Vera Miles, Ward Bond, Natalie Wood, and Monument Valley, Utah. An adaptation of the 1954 novel by Alan Le May, it's widely regarded as one of the greatest films ever made.

Three years after the end of The American Civil War, Ethan Edwards (Wayne) rides back to his brother's family homestead in Texas. Ethan is wearing the jacket of a Confederate, and he's reticent about what he did after the war, or where he obtained the money he's carrying. He intends to settle down, and to exchange long glances with his sister-in-law Martha (Dorothy Jordan), but fate has other plans in store for him.

When Ethan rides out with the Texas Rangers to apprehend some cattle rustlers, a Comanche war party attacks the homestead, kidnapping young Debbie (Wood) and murdering the rest of the family. Ethan sets off in pursuit, accompanied by his nephew-by-adoption Martin Pawley (Hunter).

The search drags on for years. Martin decides that he wants to start going steady with his childhood friend Laurie Jorgensen (Miles); naturally, the fact that he won't give up the search for his sister complicates the relationship. Meanwhile, Ethan and Martin find that they don't quite see eye-to-eye on the nature of their real mission: Martin wants to rescue his sister; Ethan wants to kill some Comanche. And as far as Ethan's concerned, if Debbie's gotten married to one of those "bucks," she's no better than a Comanche herself...

The Searchers is proof that the Revisionist Western didn't begin with Sergio Leone: This was one of the first films to examine the racism underpinning the frontier Indian conflicts.

This film is also a subversion of John Wayne's usual persona: rather than a gruff but ultimately kind-hearted cowboy, Ethan Edwards is a conflicted Anti-Hero with a genuine nasty streak, a man who desecrates Comanche corpses on the off-chance that it will hurt them in the afterlife, and who enjoys firing on retreating enemies a little too much. Between unfulfilled love and fighting on the losing side of the Civil War, he's become so jaded that he seeks solace in abandoning his humanity — but finds in the end that he can't do it. Wayne's performance as this character is widely considered the best of his career.

The film is widely influential and highly regarded: the American Film Institute ranked it #12 on their 2007 list of the 100 greatest movies; and #1 on their 2008 list of the ten greatest westerns. If you name any famous director born in the 1940s (not that there aren't later ones), they almost certainly have an Homage to this film somewhere in one (if not more) of theirs.

The film and book, and their real-life sources, are near-perfect embodiments of The Captivity Narrative. They have been cited in studies about how such narratives continue to influence American life and attitudes towards women and non-whites, to this day. Susan Faludi's The Terror Dream has an entire chapter on The Searchers and its influence on the media images and political attitudes with which America responded to the September 11, 2001 attacks.