Film / On the Waterfront 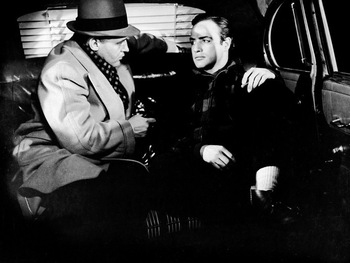 "You don't understand. I coulda had class. I Coulda Been a Contender! I coulda been somebody, instead of a bum, which is what I am, let's face it. It was you, Charley."
—Terry Malloy
Advertisement:

Terry Malloy (Brando) is a former prizefighter now employed as a dockworker in New Jersey, who gets work courtesy of his brother Charley (Steiger). Charley is a lawyer for mob boss Johnny Friendly (Cobb), who corruptly runs the local dockworkers' union. One day, Terry inadvertently participates in the murder of his friend Joey Doyle (Ben Wagner), a dockworker who had planned to testify before the Waterfront Crime Commission and expose Friendly's illegal activities. As he comforts Joey's sister Edie (Saint), and meets Father Pete Barry (Malden), a firebrand priest intent on putting an end to the mob's graft and violence, Terry is urged to help expose Friendly's crimes before someone else dies. How long can Terry go on before he finally has to act against the corrupt men who own the docks?

Nominated for 12 Academy Awards, the film won eight of them including Best Picture, Best Director (Kazan), Best Actor (Brando), Best Supporting Actress (Saint), and Best Screenplay (Schulberg).note The other Oscar wins: Best Black & White Cinematography, Best Black & White Art/Set Decoration, Best Film Editing. Cobb, Malden, and Steiger were all nominated for Best Supporting Actor, but none of them won, likely due to splitting the vote. Bernstein's score was also nominated but didn't win. It is also notable for being the only film scored by Leonard Bernstein that is not a musical. Fred Gwynne plays one of Friendly's goons and Pat Hingle and Martin Balsam turn up in uncredited bit parts.