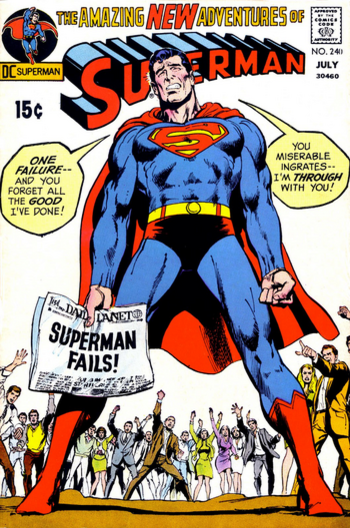 "You know what I think is compassionate? Saving the village from Eggman. Like, every week. But do I get any props for that? No! Everyone just goes around gasping at me when I call a guy 'a guy' or people 'people'!"
— Sonic the Hedgehog, Sonic Boom, "Just a Guy"
Advertisement:

After much pleading, begging, pity, and a sense of moral justice, The Hero arrives, determined to save the townspeople from a terrible fate at the hands of a devious villain. Everything's looking all right, everyone is happy, and then —

Bam. Betrayed. The villain comes out of nowhere, captures The Hero, and tells the townspeople "You have done well to betray this interloper, for after your plans failed, I would have destroyed all of you." Note that the villain will probably still follow through with the original plans anyway, the complicity of the townspeople notwithstanding.

See also: Apathetic Citizens and Les Collaborateurs. If they never liked the hero in the first place, they're probably All of the Other Reindeer.

Carthage is not grateful to Xanthippus for saving them from the Romans.

Carthage is not grateful to Xanthippus for saving them from the Romans.