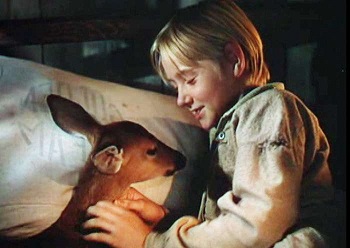 Baby wild things make good pets for a while / But in time must be let go with a smile.
— The aesop of the PBS The Berenstain Bears episode "The Baby Chipmunk"
Advertisement:

A younger character, who is usually an Animal Lover, adopts an abandoned or orphaned baby wild animal and cares for it as a beloved pet.

However, when the animal reaches maturity, the character is advised and/or pressured by the older characters to release it back to the wild. With heartbroken reluctance, the young one complies and is profoundly upset as the animal leaves. If it happens early enough in an episode or arc, this may later result in an Androcles' Lion. The fact that a creature raised in captivity will lack the necessary skills to survive in the wild will very rarely be addressed. Nature is loving and nourishing, right?

In a variant ending, the animal comes back on its own, indicating it has no intention of leaving. In the face of this resistance, the adult's resolve is broken and the young character is allowed to keep the animal for good. If they aren't released, the hero may discover their pet has possessive parents.

Another variant ending has the animal dying, and we have a Very Special Episode about death. These critters are particularly at risk of Death by Newbery Medal and Shoot the Dog. If the Pet Baby Wild Animal is especially dangerous, the person bringing it home may be a Fluffy Tamer.

In reality, most wild animals have very specific needs that a well-meaning amateur caretaker will have no idea how to fulfill, or even know that they need to be fulfilled. Wild animals raised incorrectly can be left with permanent disabilities, if they survive at all. Wild animals can also die from stress, just from being handled by humans in the wrong way. Even if the wild animal survives, this means that said animal has just been trained to see humans as a source of food rather than danger, which can lead them to wandering into towns and/or not realizing that they should be hiding from hunters. There's a reason most states require people to become licensed wildlife rehabilitators before trying to raise orphaned or injured wildlife, and it's best for everyone, especially the wildlife, if would-be caregivers contact one of them instead of trying to do it themselves.

Compare the Egg McGuffin for certain types of animal and Raised In Captivity for wild animals who are let free. See also Cub Cues Protective Parent for another type of plot that can develop when characters encounter baby wild animals. May in some cases be an example of Adoring the Pests or Training the Pet. Compare Unsuccessful Pet Adoption, which is always about non-wild pets.

When he's not painting, Bob Ross likes to look after little wild animals, like this one.

When he's not painting, Bob Ross likes to look after little wild animals, like this one.