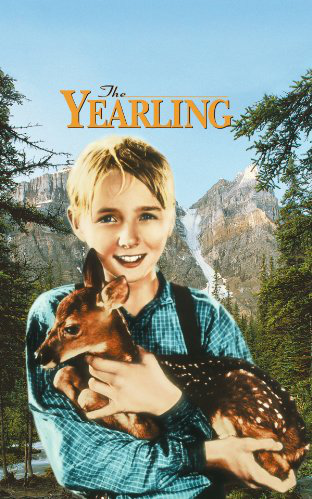 The Yearling is a 1938 Pulitzer Prize-winning novel by Marjorie Kinnan Rawlings, which was made into a 1946 film (directed by Clarence Brown, starring Gregory Peck and Jane Wyman), a 1983 anime series (Kojika Monogatari) and a 1994 TV series (starring Peter Strauss and Jean Smart).

Ezra Baxter (Peck, Strauss) and his wife Ora (Wyman, Smart) live on a hardscrabble farm in the backwoods of central Florida, along with their preteen son Jody, in 1878. Ezra is a loving father but Ora, haunted by the memory of her other children who died in infancy (six in the novel, three in the film), has a hard time showing affection for her son.

Jody, who has pestered his parents for a pet, finally gets a deer, with the support of his father and the grudging acceptance of his mother. Jody forms a deep bond with his little "yearling", whom he names Flag. But when Flag starts getting into the family's crops, he becomes a serious problem for the Baxters, who need to harvest their crops to survive.