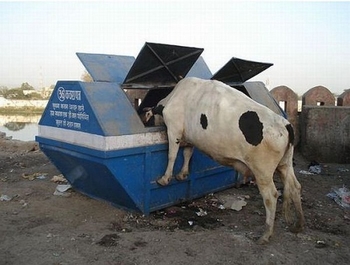 "This is a weird hay trough..."
Advertisement:

Making a Dumpster Dive is going into the dumpster note A large trash bin, ranging in size from about 3 feet wide, 6 feet long and 4 feet deep to around 7 feet wide, 30 feet long and 6 feet deep; note that "Dumpster" was originally a brand name (and a play on the name of the inventors, the Dempster brothers, who originally developed it for use in their construction business), though it's become genericized intentionally to get something.

Dumpster dives tend to show up three ways in fiction. The first is the homeless person going in to get leftover food, usable items, or metal goods like pop cans to sell for money. The second is average characters going in because they dropped something and have to retrieve it. Crime shows are the prime source of the third, which is going in to get evidence, weapons or even a body. Often leads to finding a MacGuffin or Plot Coupon. If played for laughs, the character may wind up being picked up with the trash and carried away. The aftermath often involves complaints about the smell, which sometimes even several showers can't remove.

Not to be confused with Down in the Dumps, but this can end there if the character is unlucky enough to get picked up with the trash.

Compare and contrast with Trash Landing, though that in itself is not a Dumpster Dive. That's when the character ends a fall in a Dumpster or other trash.