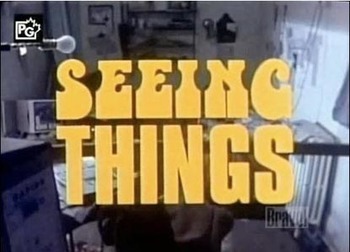 I may be seeing things, but I'm not crazy!

Louis Ciccone (played by Louis del Grandenote better known as the guy who gets his head exploded in Scanners) is a minor reporter working for a minor Toronto newspaper. One day his boss sends him to cover the divorce proceedings for a minor local celebrity, but he wanders into the wrong courtroom, where one skid row bum is being tried for the murder of another skid row bum. Before he can leave, he is struck by a postcognitive vision, showing that the accused is innocent.

Louis now has the problem of convincing the Crown Prosecutor, Heather Redfern, that she's prosecuting the wrong guy, and that he, Louis, isn't crazy. He also calls on the help of his estranged wife, Marge, whenever he needs a ride somewhere, because Louis can't drive.

Each new episode has Louis being drawn into other murder investigations, with only Redfern, and Marge, knowing about his visions.