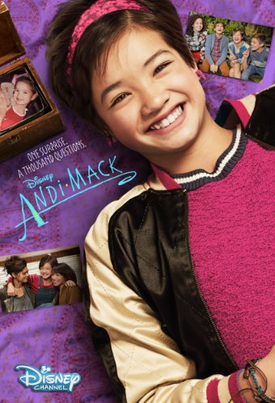 Once upon a time there was a girl whose world turned upside down.
But she didn't.
-Official Music Video

Andi Mack is a 2017 Disney Channel Kid Com slash Teen Drama about Middle School kids. The show first premiered on demand and on the Disney Channel App on March 10, 2017. It ran for three seasons, with the series finale airing on July 26, 2019.

Andi's (Peyton Elizabeth Lee) big sister Bex (Lilan Bowden) returns home the day before Andi's thirteenth birthday. When she does, she reveals a big secret that will change her world forever.

No relation to Alex Mack of The Secret World of Alex Mack.

All spoilers related to the show's First-Episode Twist are unmarked.